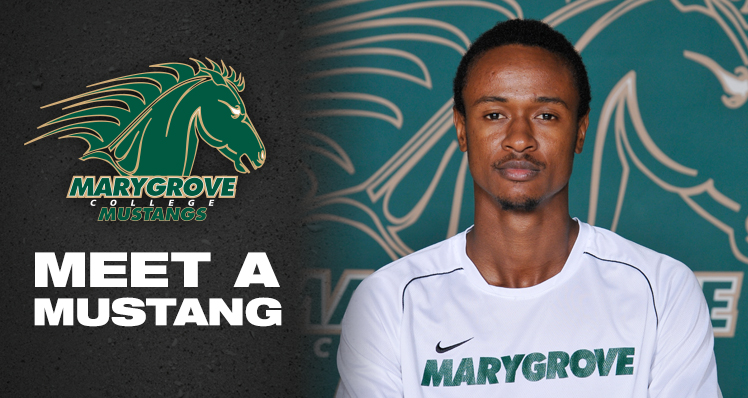 DETROIT, Mich. — Welcome to Meet-A-Mustang â a new way for you, the fans, to get to know the student-athletes that represent Marygrove College on-and-off the playing field. On Wednesday (Feb. 5), we continued our series with Abdoulie JallowÂ from the men’s soccer team.

Jallow, a 2012 Wolverine-Hoosier Athletic Conference (WHAC) Men’s Soccer Newcomer of the Year and 2013 WHAC First Team All-Conference member, recently finished another successful campaign for the Green & Gold at Marygrove College. The talented sophomore tallied four goals and added two assists in a 2013 season in which he moved to center back to help the team through an injury-riddled season. During the interview, we had the opportunity to talk with the sophomore men’s soccer standout about his time at Marygrove, his home country The Gambia, and a few other items just for fun. Enjoy!

What do you miss the most about home?
I will say the food, family, and friends.

What’s your favorite thing about the United States?
That’s a very tough question because I have a lot of favorite things. I would say the people. They are very awesome, nice. Everybody has been wonderful to me. I think that has stood out the most.

Is your lifestyle different here than how it was back in your home country?
I am the same person; I do the same things that I was doing in The Gambia. But a little bit different because the culture here is different. Sometimes you have to adapt and do things like they do it here. That will be the only difference, but for me as a person I am the same.

How does it feel to be named Wolverine-Hoosier Athletic Conference Men’s Soccer Newcomer of the Year in 2012 and to be recognized as WHAC First Team All-Conference in 2013?
It feels great! It is always good to be recognized for all the effort that you put in and work that you have done, but the biggest reward will always be having people that support me on and off the pitch. My coach (Matt Johnson) is great! He supports me on and off the pitch and treats the team as family. The trainers were also helpful. I had a couple injuries, but they helped me recover as soon as possible. The most important supporters of all were my teammates. Everything would have been impossible without the great guys around me and the great support I received. They helped me. I remember the first time that I came to a practice session and they gave me a nickname. From there, I went in, settled down and was comfortable doing things. Teammates are the most important.

What’s your goal for next season?
My goals will be to win the WHAC. We were able to make the playoffs our first two years â it was great â but being able to win the conference championship would be my goal.

What’s your favorite dish?
My favorite dish… Well, it is a tough one because I am the kind of person that will eat almost anything. I do not have a favorite thing, but if I were to choose one, it would be one of the local dishes in The Gambia. It is called Benachin. It is prepared with rice and vegetables. You can even have fish, beef or whatever you want. That is my favorite dish.Â

What’s your dream job?
My dream job as a CIS and Business major would be in the programming field. I want something connected to what I am studying right now. But above all, I also want to be able to help kids and teach them how to play soccer. Maybe being a coach, that would be awesome! Being a coach is something that I am really interested in and looking forward to do.Â

The above interview was conducted by English/Communications student and women’s soccer student-athlete,Â Andrea Aznar. Video production by Jeremy Otto.