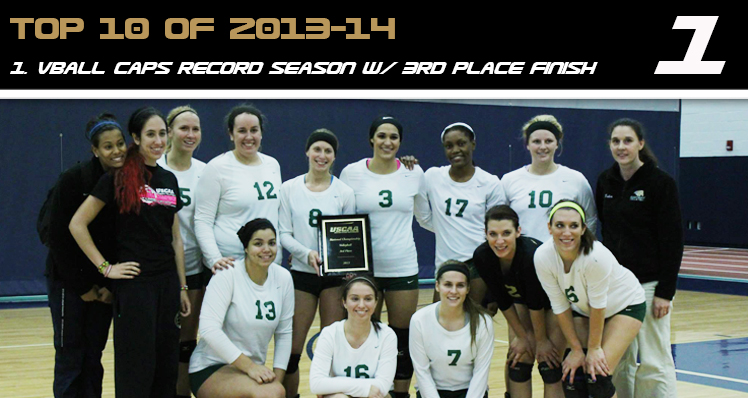 We’ve reached No. 1in our countdown in the #MGTop10 of the 2013-14 season. Coming in at No. 1 isâ¦â¦â¦..women’s volleyball! Head coach Jamie Baker and the Mustangs had a remarkable 2013 season and shattered many single season records along the way.The team landed on the top spot in this year’s countdown for their trip to New York and third place finish overall in the USCAA to put the icing on a stellar campaign. With a complete roster overhaul and a daunting WHAC slate, the women’s volleyball team navigated the 2013 season en route to a 19-16 overall record after making it to the national semifinals in New York.

The trip, along with individual awards ranging from an Academic All-American (Alixandria Pappas) to All-Americans (Katharina Hall, Kara Kempinski and Millie Velez) was a resounding success for the team and a huge building block for years to come. Congrats @MGroveVBALL for taking home the No. 1 spot in this year’s #MGTop10 countdown! Good luck to all teams this year! #TeamMG

CANTON, N.Y. –Â The Mustangs went into Canton, N.Y., and took home third place in the United States Collegiate Athletic Association (USCAA) after dispatching Rochester in Saturday’s (Nov. 2) third place match. The win over Rochester was the 19thÂ of the season for head coachÂ Jamie BakerÂ and the Mustangs (19-14, 2-8 WHAC)Â â a single-season program record. Saturday’s to clinch third in the nation (USCAA) eclipsed the previous best of 18 wins set in 2010.

The third place victory followed a four-set loss in the national semifinal match to Florida College.

In the match against Florida College, the Mustangs went down by two sets before another great comeback would take place. Taking the third set, the Mustangs began a rally that would last deep into set four before Florida pulled away. The never-say-die attitude of the team showed once again in the hard-fought loss.

“We went to New York with a goal of a championship for the seniors,” said Baker. “Regardless of the result, I am so proud of the team for their hard work and heart shown throughout the season. We still have plenty of volleyball left with a WHAC regular season match and a potential postseason run in us.”

Kara KempinskiÂ had 18 digs to solidify a spot on the USCAA’s All-Tournament Team.Â Nicole KempinskiÂ (Livonia, Mich./Schoolcraft College) finished with 32 assists against the Warriors.

The Mustangs will be back in action when they play Lawrence Tech next week. The match’s date and time is TBA due to a building conflict at UD-Jesuit.