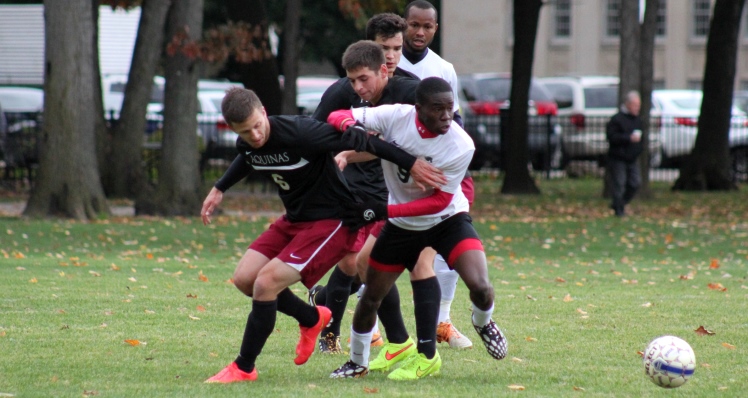 DETROIT — The Marygrove men’s soccer team will host a historic game on their northwest Detroit campus Saturday (Nov. 8) when Wolverine-Hoosier Athletic Conference (WHAC) counterpart Aquinas College visits for the opening round of the conference tournament. The opening-round contest will be the first playoff game held on the Marygrove campus as the Mustangs (7-10-1, 6-3-1 WHAC) hope to continue their season with a win over the visiting Saints (10-7-1, 4-5-1 WHAC).

The athletic department is required to charge admission for Saturday’s playoff game (per WHAC policy). General admission is $7 for adults and $5 for senior citizens and children. Marygrove students (with College ID) will have FREE admission!

INSIDE THE NUMBERS
Sixth-year head coach Matt Johnson and the Mustangs have qualified for the Wolverine-Hoosier Athletic Conference (WHAC) playoffs three (3) years in a row â or every year since the program joined the illustrious conference in 2012. This season, the Mustangs earned their highest seed ever (4th) after going 6-3-1 in conference play. The fourth-seed earned Marygrove’s first home playoff game for any sport as the Mustangs welcome fifth-seeded Aquinas to Detroit Nov. 8 at 2 p.m.

THE LAST TIME THEY MET
Marygrove and Aquinas met in Detroit on Oct. 18 with the Mustangs coming away victorious by a 2-0 final. The Mustangs, looking to erase the memory of being ousted by the Saints in the 2013 playoffs, won behind goals from Mohamed Alkhulaidi and Alex Cabildo and strong play from the defense.

A LOOK AT AQUINAS
The Saints earned the WHAC’s fifth seed by posting a 4-5-1 record in conference play. The Saints won their final game of the season, topping Siena Heights 3-0 to finish one point ahead of Concordia-Ann Arbor and Indiana Tech for the conference’s fifth spot.

MENDEZ IS THE MOTOR
Junior forward Aldony Mendez is the motor behind the Aquinas Saints’ attack.Â  Through 18 games, Mendez has racked up impressive numbers, tallying 17 goals and an assist for a 35-point campaign. The gaudy numbers place Mendez second in the WHAC (goals/points) to DU’s Catic with 30 goals and 68 points.

HISTORY IN THE MAKING
Saturday (Nov. 8) will mark the first time postseason play of any kind will be played on the campus of Marygrove College. The Mustangs have been in theÂ  WHAC playoffs every year since joining the conference, advancing to the semis in 2012.

COACH JOHNSON’S CORNER
“Without question, we can now say Saturday’s playoff game is the biggest game to be played in the history of our program,” said Johnson. “Our guys have had a great week of practiceso farÂ  and are ready to play against a quality Aquinas team for the second time this season. Ever since we played Aquinas the first time (Oct. 18), we discussed that we would likely see them again in the playoffs,” continued Johnson. “The WHAC is a tough conference as evidenced by this upcoming four vs. five game seeing as Aquinas could be the best five seed any conference has to offer. We will be ready to play Saturday knowing both teams will bring their best.”

THE WHAC PLAYOFF SCENE
The Aquinas/Marygrove game is one of four quarterfinal contests being played around the WHAC landscape Saturday (Nov. 8). The conference’s top seed, Northwestern Ohio, hosts the eight-seed Cornerstone Golden Eagles at 2 p.m. in a matchup that will determine who plays the winner of the Aquinas/Marygrove contest. On the other side of the bracket, second-seeded Madonna hosts nearby foe Concordia-Ann Arbor for a 2 p.m. kick, while Davenport hosts Indiana Tech in the three vs. six matchup at 7 p.m.Â  The four winning teams will move on to the conference semifinals on Tuesday (Nov. 11) before two advance to the championship on Friday (Nov. 14).

HOME PLAYOFF GAME COVERAGE
The Mustangs Nov. 8 quarterfinal game in Detroit will be covered by the Mustang Sports Network with the Voice of the Mustangs, Jeremy Otto, on the call for the 2 p.m. kick. Coverage begins with a special start time of 1:45 p.m. only on marygrovemustangs.com/live.