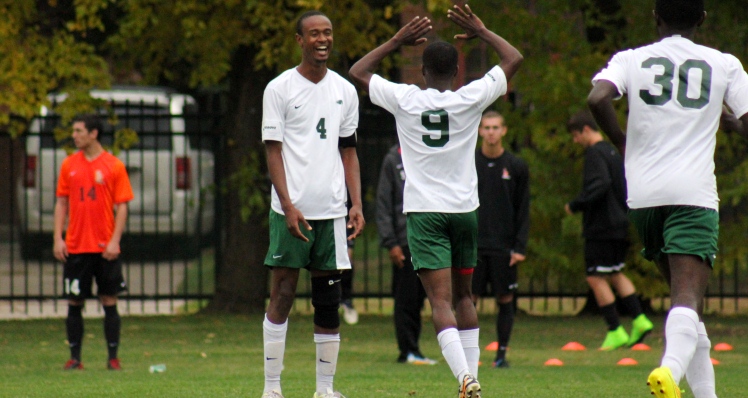 GRAND RAPIDS, Mich. — The 2014 men’s soccer award teams were announced by the Wolverine-Hoosier Athletic Conference (WHAC) Thursday (Nov. 6), honoring the conference’s top student-athletes for their performance on-and-off the field. This year, four Marygrove College student-athletes were honored to various teams for their performance on the field, in the classroom and for their leadership in the community.

The WHAC’s announcement comes 48 hours prior to the start of postseason play Saturday (Nov. 8), when eight of the conference’s best teams will kick-off the “second season” around the league.

FIRST TEAM ALL-CONFERENCE
Junior forward Abdoulie Jallow (Bansang, The Gambia/Rust College) took home high honor from the WHAC, earning an All-Conference First Team selection after posting eight goals and 11 assists throughout the regular season. The junior forward put together a remarkable season, amassing 27 points in 16 appearances to lead the Mustangs in scoring. Jallow’s 11-assist campaign broke his own program record of eight assists set in 2012, while his eight goals is second to his previous best of nine, also set in 2012.

Jallow’s 27-point season was good for third in the conference behind Davenport’s Dzenan Catic and Aldony Mendez from Aquinas. Jallow and Mendez will meet this Saturday (Nov. 8) in Detroit as the fourth-seeded Mustangs (7-10-1, 6-3-1 WHAC) host the five seed Aquinas Saints (10-7-1, 4-5-1 WHAC) at 2 p.m.

HONORABLE MENTION ALL-CONFERENCE
Junior forward Oneil Robinson (Montego Bay, Jamaica/Cornwall College) and defender Ramon Salas (Madrid, Spain/University of Madrid) followed Jallow, receiving a nod on the WHAC All-Conference Honorable Mention Team after a vote of the conference’s coaches. Robinson led the Mustangs in game-winning goals (3) on his way to a 17-point season. Appearing in all 18 games, Robinson tallied seven goals and three assists to trump his previous bests of four goals and two assists set in 2013.

Salas, joining the Mustangs alongside his brother Jose Salas at the start of conference play, burst onto the scene as one of the team’s anchors in the back. [Ramon] Salas started in all nine appearances, chipping in with a pair of goals and an assist for a five-point season from his defensive position. The Madrid, Spain native posted eight shots, with his only two on target finding the back of the net.

WHAC ALL-ACADEMIC TEAM (minimum 3.25 GPA and junior or above academic standing at Marygrove)
Jallow and teammate Alex Cabildo (Westland, Mich./Schoolcraft College) earned a spot on the WHAC’s All-Academic team for their hard work in the classroom at the four-year private institution. For Jallow, the WHAC All-Academic honor is a first of its kind in what is becoming a long line of academic awards for the junior forward. Jallow is now a two-time United States Collegiate Athletic Association (USCAA) Academic All-American to go along with the new WHAC honor.

Cabildo was named to the WHAC’s All-Academic squad for the second year in a row. A senior from Westland, Cabildo has racked up the academic honor since arriving on Marygrove’s campus in 2012. The senior midfielder is a two-time WHAC All-Academic member and a two-time USCAA Academic All-American.

Both Cabildo and Jallow were named to the conference’s academic team for meeting or exceeding the requirements of a 3.25 cumulative GPA and a junior or above (64 credit hours) in academic standing.

WHAC CHAMPIONS OF CHARACTER TEAM
Alex Cabildo, a senior midfielder, was named to the 2014 WHAC Champions of Character Team after being nominated by head coach Matt Johnson for his leadership and steady presence on-and-off the field. The senior was honored as the Mustangs’ best representative of the NAIA’s Five Core Values of Integrity, Respect, Responsibility, Servant Leadership, and Sportsmanship.