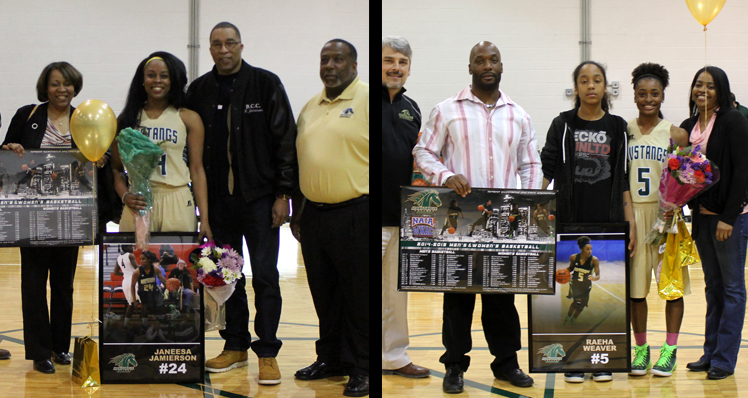 STAY CONNECTED:Â FacebookÂ |Â TwitterÂ |Â InstagramÂ |Â YouTube
BE THE FIRST TO KNOW:Â Text & Email Alerts
DOWNLOAD OUR FREE APPS:Â iOS (iPhone/iPad)Â |Â Android Â  DETROIT — The 2014-15 home season came to a close for Marygrove women’s basketball Wednesday (Feb. 18) as the Mustangs fell to the visiting ConcordiaÂ Cardinals, 75-72, inside Detroit’s Northwest Activities Center. The loss drops the Mustangs to 4-25 overall and 2-19 in WHAC play. The Cardinals improve toÂ 4-17 in conference and 5-24 overall with the three-point win over the Mustangs.Â The Mustangs received a career-high from combo guard Shavarra Patton (Detroit, Mich./Northwestern High School) and strong performances from seniors JaneesaÂ Jamierson and Raeha Weaver, but couldn’t keep pace late as the Cardinals pulled away to win the one-possession conference thriller.Â Â After going down 2-0, the Mustangs burst out to an 8-2 run after the seniors, Jamierson and Weaver, connected on back-to-back baskets to give the Green andÂ Gold an 8-4 lead with 17:31 remaining in the opening half. The early run marked the first of six lead changes and six ties in the first half as theÂ Cardinals and Mustangs engaged in a back-and-forth opening 20 minutes.Â Â The Cardinals pushed ahead to take their largest lead of the game, 21-15, with 11:07 left in the first half after leading scorer Kari Borowiak connected onÂ an old-fashioned three-point play. The six-point lead was erased after the Mustangs went on a 13-7 run, knotting the game up at 28-28 with just over fiveÂ minutes remaining in the opening stanza. The Cardinals finished the first half strong to take a 43-37 lead into the half.Â  Elisha Major (Flushing, Mich./Flushing High School) led the Mustangs first-half effort with eight points while Kierra Jordan (Westland, Mich./John GlennÂ High School) and Patton followed with seven points each.Â Â A pair of Tiffany Bradford (Detroit, Mich./Dakota College) threes led the Mustangs back to tie the game, 48-48, with 14:46 remaining as the Green and GoldÂ attempted to halt the Cardinals post scoring. Jamierson droppped in a layup less than a minute later to give the Mustangs a 50-48 lead, but the CardinalsÂ attacked the paint from there, never relinquishing the lead again to escape the Motor City with the three-point victory.Â Â The Cardinals held off the Mustangs behind a 36-20 advantage in points in the paint in a game that was witness to eight lead changes and eight ties. TheÂ Mustangs countered with a dominating bench performance to take a 36-5 advantage in reserve scoring in the conference setback.Â The Mustangs were led by Patton with 19 points on 7-of-10 shooting while Weaver followed with 13 points in her final home game as a Mustang. Jamierson andÂ Major finished with 10 points each with Jamierson adding seven boards to complete a well-rounded final home outing in the Marygrove Green and Gold. JordanÂ added a team-high 10 rebounds for second-year head coach Craig Covington and the Mustangs, posting seven points and a pair of steals in 26 minutes.Â Michelle Murnen led four Cardinals in double figures scoring with 19 points. Breanne Short added a game-high 13 rebounds to stave off a last-minuteÂ comeback by the Mustangs.Â The 2014-15 season concludes Saturday (Feb. 21) with a 1 p.m. road tilt at NAIA Division II No. 2 Davenport. The game will be streamed live onÂ marygrovemustangs.com/live (Davenport coverage) beginning at 12:40 p.m. Saturday afternoon.Â  WOMEN’S BASKETBALL CONTACT: Tim Johnston |Â @tjohnston56
MARYGROVE BROADCASTS:Â Mustang Sports NetworkÂ |Â Twitter
SOCIAL MEDIA:Â Women’s Basketball on Twitter