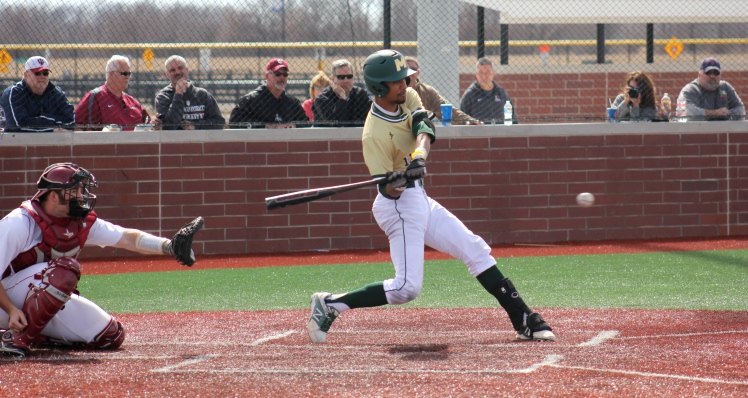 WESTFIELD, Ind. — Marygrove baseball dropped two games to IU-Southeast â one of the top teams in the Kentucky IntercollegiateÂ Athletic Conference (KIAC) â in what acted as theÂ final tuneup before Wolverine-Hoosier Athletic Conference (WHAC) play begins. The Mustangs, now 1-10 in their inaugural season of play, left 17 runners stranded on an unlucky Sunday (March 15)Â afternoon as the host Grenadiers won 11-0 and 6-0 to earn the sweep over the Green and Gold at Grand Park in Westfield, Ind.

GAME ONE â IU-SOUTHEAST 11, @MGroveBASEBALL 0
Game one got off to a rocky start as the Grenadiers posted six runs in the first inning on freshman pitcher Daniel Bailey (Harrison Twp., Mich./L’Anse Creuse). The freshman bounced back nicely to only allow three hits over the next four innings of work, but the Mustangs offense couldn’t string enough hits together to climb back into the game.

The Grenadiers plated five runs in the sixth inning to put the game away as the Mustangs left a total of 11 runners on base in the game-one setback. James Edwards (Detroit, Mich./Shaw University) had two hits to lead the Mustangs offensively in game one.

Edwards also had a chance to produce a pair of web gems in the outfield in the six-run first inning, falling just short of completing two diving catches. If completed, Edwards and company would have limited the Grenadiers’ first-inning damage to a mere two runs.

Bailey took the loss to drop to 0-2 on the season while the Grenadiers’ Clint Chestnut picked up his second win of the 2015 campaign.

GAME TWO â IU-SOUTHEAST 6, @MGroveBASEBALL 0
The Mustangs battled tough behind starting pitcher Jon Weatherspoon (Ann Arbor, Mich./Huron High School), but fell shy of plating a run as the Grenadiers completed a four-game sweep of the Mustangs with a 6-0 victory. Weatherspoon tossed five innings of four-hit, four-run ball despite struggling with command all afternoon. The freshman righty kept the Mustangs within striking distance, but the Green and Gold’s unlucky day at the plate continued after they left six runners stranded in the latter of two games on the afternoon.

Despite the lack of run production and a 6-0 setback, the Mustangs were able to match the Grenadiers in hits with five in game two. Timely hitting and seven walks pushed six runs across for the Grenadiers, lifting the one of the KIAC’s favorites to win the league crown to 10-4 on the season.

Trey Blandford (Louisville, Ky./Fern Creek High School) â one of five Mustangs to collect a hit in game two â dropped in a single through the right ride for his first collegiate hit in the third inning.

Greg Laughlin picked up the win for the Grenadiers after pitching five innings and scattering five hits for no runs.

UP NEXT
The program’s inaugural home games and first WHAC contestsÂ areÂ slated for Wednesday (March 18) opposite of Concordia-Ann Arbor. The current date, location and time of the doubleheader with Concordia is to be determined despite its scheduled Wednesday afternoon first pitch due to lingering field issues and weather concerns. Updates regarding the two-game set with Concordia will be posted on facebook and twitter as well as marygrovemustangs.com throughout the beginning of the week.