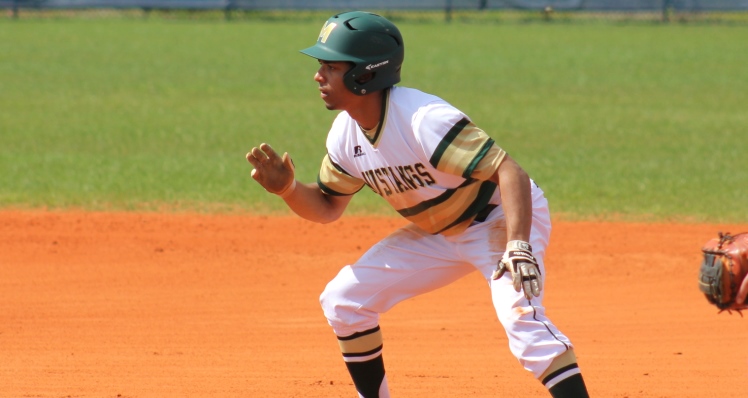 LIVONIA, Mich. â Marygrove baseball dropped to 2-13Â overall and 1-3 in WHAC play after suffering a pair of setbacks at the hands of the Madonna University Crusaders on Friday (March 20), one day after the Mustangs finished theirÂ marathon 2-1 win over Concordia.Â The Crusaders moved to 14-7Â overall and 4-0 on the season with the wins, joining No. 8 Davenport as the lone 4-0 teams in the WHAC.

The Mustangs, a first-year program, will return to action Saturday (March 21) to face the Crusaders, a team in it’s 27th season in 2015.

GAME ONE â MADONNA 12, @MGroveBASEBALL 2
Freshman pitcher Dan Bailey (Harrison Twp., Mich./L’Anse Creuse High School) continued to improve despite leaving Friday’s opener charged with the loss. Bailey tossed five-and-two-third innings, only giving up four earned runs as the Mustang defense accounted for three errors behind the freshman to put the Green and Gold in a 6-0 hole through two innings.

The Mustangs had a chance to post a big inning in the top of the third, loading the bases with nobody out and sophomore infielder Chase Younkin (Macomb, Mich./Culver-Stockton College) at the plate. After a Younkin strikeout, senior James Edwards (Detroit, Mich./Shaw University) reached via error to bring across the first Mustang run of the game. Freshman first baseman Josh Barnes (St. Clair, Mich./St. Clair High School) followed later with a two-out, bases loaded walk to bring the Mustangs to within four, 6-2, after two-and-a-half innings as the Green and Gold missed a chance to climb back into the game.

Bailey came back to shut down the Crusaders until the hosts knocked in three more in the sixth. With Bailey out of gas, first-year head coach Ryan Kottke went to Trey Blandford (Louisville, Ky./Fern Creek High School) with two outs and two men on and was rewarded as Blandford â the conference leader in appearances â shut the door on the Crusaders to limit the damage. The Crusaders eventually broke free in the bottom of the eighth to plate three more runs and end the game via run-rule, 12-2.

The Mustangs recorded five hits from five different batters with Barnes and Edwards recorded a RBI each in game one. The Crusaders were led by shortstop Ryan Lambrecht with a 3-for-5 opener and four RBIs.

Adam Prashad pitched six-and-one-third innings of three-hit, two-run ball to get the win for the Crusaders and move to 4-0 on the season.

GAME TWO â MADONNA 12, @MGroveBASEBALL 0
The Crusaders jumped out to an 11-0 lead through three innings and never looked back, shutting out the Mustangs for a 12-0 win. The win dropped the Mustangs to 1-3 in conference play as they prepare to bounce back Saturday (March 21) against the Crusaders.

Drew Johnson (Trenton, Mich./Trenton High School), a freshman outfielder, collected his first hit at the collegiate level with a bunt single to lead off the fifth inning. The speedy outfielder was able to tally hit No. 1 at the college level with a well-played bunt past the pitcher to give the Mustangs a runner on and no outs. In a game of firsts, freshman Troy Justice (Detroit, Mich./Southfield Lathrup High School) sent a ball up the middle for his first hit at the collegiate level. Justice’s base hit gave the Mustangs a runner on with no outs for the second straight inning, but the Green and Gold couldn’t string enough hits together to fall, 12-0, in game two.