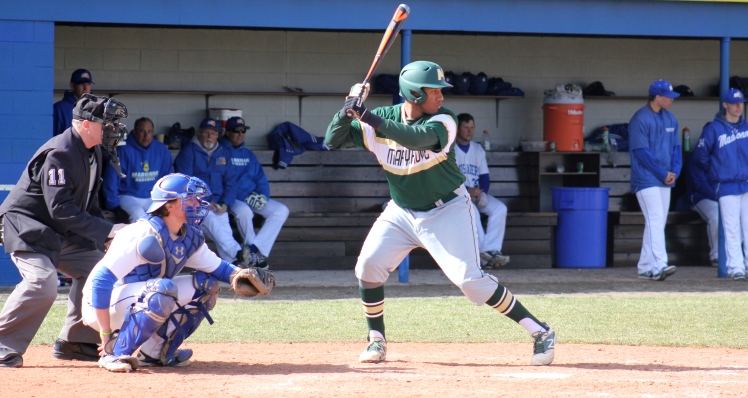 LIVONIA, Mich. — After letting Madonna come-from-behind to take game one, 8-5, Marygrove baseball fell in the series finale by a 12-1 margin to the Crusaders to end the weekend with a 2-15 record overall and a 1-5 mark in Wolverine-Hoosier Athletic Conference (WHAC) play. The Crusaders improved to 16-7 on the season with the wins and 6-0 in WHAC action.

Both games were held at Ilitch Ballpark in Livonia, Mich.

Then with two men on and two outs, freshman outfielder Mavrick Dube drove Edwards and Raleigh Wilson (Harrison Twp., Mich./West Texas College) home after a stellar at-bat. Dube (Warren, Mich./Mott High School) worked the Crusaders’ starter, Todd Jones, to a 12-pitch at-bat before driving a two-run single through the left side of the infield. Dube’s plate appearance, leading to a 3-0 advantage through one inning for the Mustangs, was enough to chase Jones out of the game as the Crusaders turned to their bullpen early in game one.

The Crusaders pulled ahead in the bottom of the third, putting up three runs in the frame to lead, 4-3, after three in the nine-inning contest. The Mustangs knotted the game up in the top of the fourth when Younkin drove home Drew Johnson (Trenton, Mich./Trenton High School) to make the scoreboard read 4-4 after three-and-a-half innings.

Errors started to pile up and plague the Mustangs in the bottom half of the fourth as the Crusaders regained the lead for good after two Green and Gold miscues led to two runs for the hosts. With a 6-4 lead after four, the Crusaders turned to reliever Patrick Wierimaa who did the rest by going four innings and giving up one unearned run.

The Mustangs brought the tying run to the plate in the top of the ninth but could not covert as the Crusaders held on for the narrow 8-5 conference win. Edwards tossed six innings, only giving up three earned runs despite leaving the game trailing, 7-4, as Mustang errors continued to mount.

David Chung (Warren, Mich./Bishop Foley High School) led a balanced Mustangs attack offensively by going 3-for-5 and scoring a run. The Mustangs tallied 10 hits as a team compared to 11 for the Crusaders.

GAME TWO â Madonna 12, @MGroveBASEBALL 1
Freshman starting pitcher Jacob Baker (Berkley, Mich./Berkley High School) lasted two inningsÂ after the defense accounted for four early errors and a 7-0 Crusader lead. Despite the large deficit, Baker pitched well and was only charged with twoÂ earned runs in what was anÂ unlucky outing for the freshman out of Berkley.

The early lead was all the Crusaders needed in the fourth and final game of the series as they went on to top the Mustangs, 12-1.

Troy Justice (Detroit, Mich./Southfield Lathrup High School) entered the game in the sixth and clubbed a double into the left center gap for his second hit of the season. Ernesto Carrillo (Dearborn, Mich./Pro Baseball Academy) was responsible for the other extra-base hit for the Mustangs after his gap-shot to rightÂ center was enough for the freshman to reach second base.

Taylor Turner got the win for the Crusaders after four innings of two-hit ball.

UP NEXT
The Mustangs will make the trip back to Siena Heights Wednesday (March 25), this time as the away team for a WHAC doubleheader against the host Saints at 2 p.m. The Mustangs will look to continue the magic created Thursday (March 19) when the Green and Gold walked off Concordia-Ann Arbor in the 10th inning at 1:26 a.m. The Mustang Sports Network will travel with the squad Wednesday to bring you live audio coverage of the conference doubleheader beginning at 1:50 p.m. on marygrovemustangs.com/live.