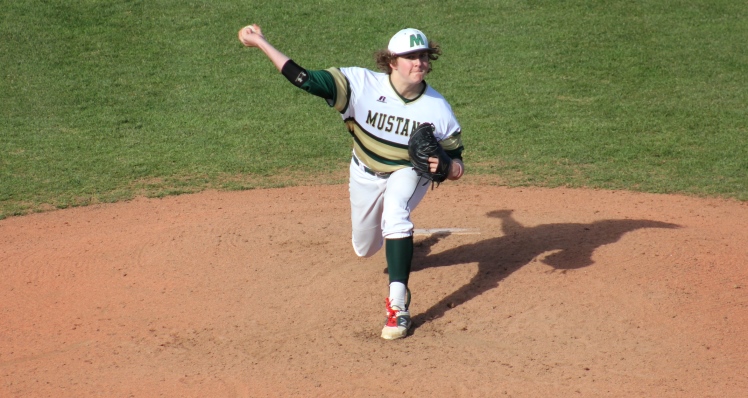 LIVONIA, Mich. –Â Oh so close! Marygrove baseball, in its first season, nearly pulled off the upset against one of the WHAC’s hottest teams, Indian Tech, in game two of Saturday’s (April 25) conference doubleheader in Livonia, Mich. The Mustangs lost game one to the Warriors, 12-1, before taking the visitors to extra innings in the latter contest, losing 3-2 in nine innings of the seven-frame outing.

By squeaking out the game two win, the Warriors improved to 25-23 overall and 15-12 in WHAC play. The Warriors, one conference series removed from topping fellow conference foe Siena Heights, 29-5, have now won 12 of their last 13 outings overall.

GAME ONE â Indiana Tech 12,Â @MGroveBASEBALLÂ 1
Daniel Bailey (Harrison Twp., Mich./L’Anse Creuse High School) went five innings for head coach Ryan Kottke and the Mustangs, giving up four earned runs despite trailing 8-0 at the time of his departure. A freshman, Bailey continued his improvement during the season’s second half by working out of trouble on multiple occasions and earning a pair of strikeouts in five full innings of work.

The Warriors jumped on top and never looked back after a five-run third inning, scoring three more in the fourth frame to take an 8-0 lead and chase Bailey out of the game.

The Mustangs were able to avoid the shutout in the seventh inning when freshman infielder David Chung (Warren, Mich./Bishop Foley High School) hit a sac fly to deep left field to score Troy Justice who reached on an error earlier in the inning. Justice (Detroit, Mich./Southfield Lathrup High School) was moved to third for Chung one batter earlier off of a Drew Johnson (Trenton, Mich./Trenton High School) double down the left-field line â the third of the speedy freshman’s career.

Johnson and Chase Younkin (Macomb, Mich./Culver-Stockton College) led the Mustangs offensive effort with two hits each in game one.

The Warriors’ Clay Wallace picked up the win after going six-and-one-third innings, giving up seven hits and striking out one Mustang batter.

GAME TWO â Indiana Tech 3,Â @MGroveBASEBALLÂ 2 (9 innings)
Game two â scheduled for seven innings Â â went the distance and then some as the Mustangs rallied in the late innings to send the latter contest to extra innings. Freshman pitcher Ryne Underwood spun a game once again, going seven scoreless after giving up a pair of first-inning runs to the high-powered Warriors offense.

Underwood put forth a dominant performance despite going toe-to-toe with a team that was averaging just north of 13 runs per game over their last nine outings. The freshman from Louisville, Ky. shut down the red-hot Warriors, scattering five hits over seven-straight scoreless innings after giving up two runs on a pair of hits in the first inning.

After going down 2-0 in the first, the Mustangs battled offensively behind Underwood’s (Louisville, Ky./Fern Creek High School) fine performance. The Mustangs finally scratched a run across the plate in the fifth inning, cutting the Warrior lead in half, 2-1, when Jon Weatherspoon (Ann Arbor, Mich./Huron High School) recorded the RBI on a groundout to the shortstop.

Trailing 2-1 heading into the seventh and final inning in game two, senior James Edwards (Detroit, Mich./Shaw University) sent a single up the middle to send the Warriors starter to the dugout in favor of relief pitcher Tj Lutz. The Mustangs would get to Lutz, rallying to tie the score (2-2) off of a Kyle Hartwick single to right field.

The game remained tied through eight innings after the Mustangs spoiled a lead-off double by Trey Blanford (Louisville, Ky./Fern Creek High School), sending the game to the ninth inning where the Warriors would capitalize off of a pair of Green and Gold errors to win, 3-2.

Hartwick (Oxford, Mich./Rend Lake CC) led the Mustangs in game two by going 3-for-4 with the game-tying RBI in the seventh inning.

UP NEXT
Jimmy Stewart returns to the Mustang Sports Network airwaves to join Jeremy Otto for the call of Sunday’s (April 26) doubleheader with Indiana Tech. Pregame coverage begins at 12:50 p.m. on marygrovemustangs.com/live.