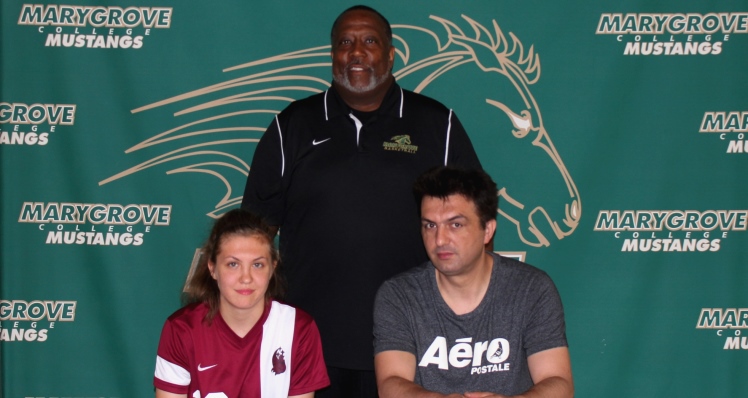 DETROIT â Marygrove College women’s basketball head coach Craig Covington announced the signing of Leijla Masinovic on Thursday (May 28) as the first class of 2015 commitment for the Mustangs. The Hamtramck High School product signed to continue her basketball career hours before Masinovic and the Cosmos district soccer game.

Masinovic, a 5-4 combo guard, put pen-to-paper to attend the northwest Detroit institution for Covington’s Mustangs by signing a 2015-16 Letter of Intent on campus. The signing took place three weeks after Masinovic originally signed during one of Hamtramck’s signing days in early May.

On the hardwood, Masinovic averaged a career-best 24 points per game this season for head coach and former Mustang great, Dennis Foster. Coach Covington attended a game this season in which Masinovic tallied 29 points, leading to a triple-team from Detroit’s King High School in the districts.

The outstanding season was a product of stellar coaching and hard work, as well as a summer with the heralded Team Detroit squad between her sophomore and junior seasons.

The well-rounded athlete also played three years of varsity soccer for the Cosmos, appearing mainly as a striker/forward for a growing Hamtramck program.

COACH COVINGTON’S TAKE
“Leijla is a flat out scorer,” said Covington. “She brings a great amount of toughness to our program and reminds us a lot of Raeha Weaver from last year’s team. Leijla is well-coached and well-prepared for the college level thanks to the tutelage from Coach Foster. She is a hard-nosed player that is accustomed to other teams double-teaming throughout her high school career. I look forward to working with Leijla next season.”