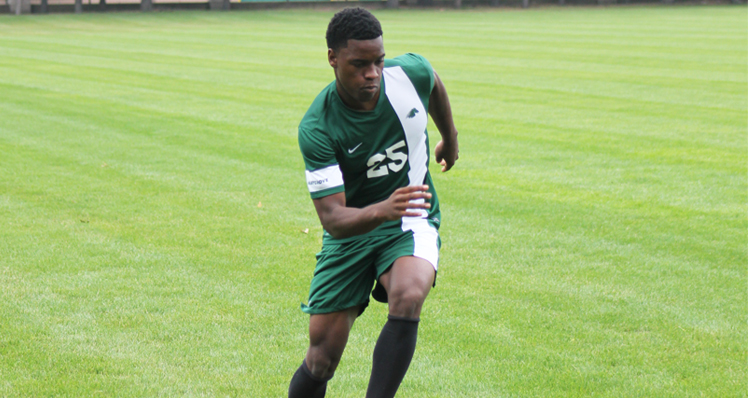 COLUMBIA, Ky. — Marygrove men’s soccer opened the 2015 season Wednesday (Aug. 19) facing the NAIA’s No. 9 team, Lindsey Wilson (Ky.), without several projected starters. The shorthanded Mustangs allowed a goal in the 3rd minute before settling in to tie the game late, sending the season-opening tilt to overtime where the host Blue Raiders eventually prevailed, 2-1.

Momentum was seized by the Blue Raiders (1-0-0) in the 3rd minute when a set-piece ball bounced around the box inside the near post past keeper Austin Valentine (Westland, Mich./Concordia-Ann Arbor). The Mustangs shook off the early goal and settled in to a well-played first half to go into the break down, 1-0.

Sophomore forward Curtis Tiapocket (Nanterre, France/Wayne County Community College) had the lone shot on target for the Mustangs (0-1-0) in the opening half, a strike in the 24th minute that would make the Blue Raiders keeper work left for a quality save.

The Mustangs’ Gbenga Ayanwale (Osun State, Nigeria/Atanda International) notched the equalizer in the 83rdÂ minute from the left side of the box after a well-timed pass from returning All-WHAC performer Abdoulie Jallow (Bansang, The Gambia/Rust College) set up the play for his 22nd career assist.

Ayanwale’s goal â coming in his collegiate debut â sent the game to golden-goal overtime where the Blue Raiders’ Aleksi Pahkasalo toed a well-struck ball upper-90 to lift the hosts to a 2-1 victory over the Mustangs after a hard-fought 95 minutes of action.

Valentine enjoyed a fine Marygrove debut after turning away four Blue Raider shots behind a makeshift Mustang defense that was up to the task. The Blue Raiders outshot the Mustangs on target, 6-2, over the course of the 95-minute affair.

The aforementioned group entered the 2015 season with a combined 148 career starts at the collegiate level.

The Mustangs will host Bethel (Ind.) on Saturday (Aug. 22) to open the home portion of their 2015 slate at 5 p.m. The Mustang Sports Network will debut its men’s soccer coverage at 4:45 p.m. on marygrovemustangs.com/live with Jeremy Otto and Brendan Johnson on the call.