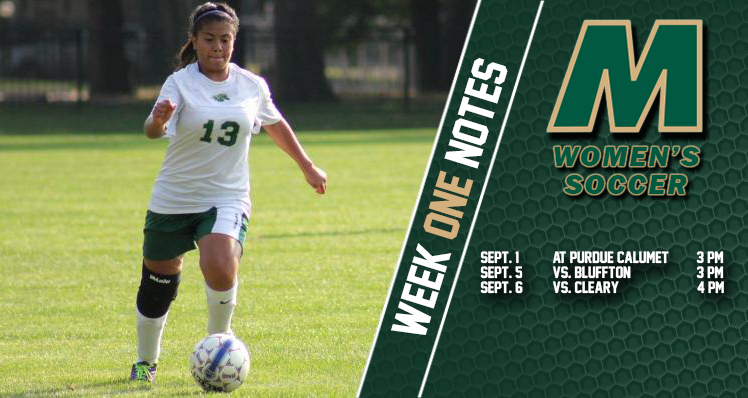 BY THE NUMBERS
1:Â Did you know the Marygrove women’s soccer program has won one (1) national title? In 2009, the Mustangs’ women’s soccer squad put together a remarkable campaign, going 10-4-2 overall on their way to win the United States Collegiate Athletic Association National Championship. The title run, improbably, would come in the program’s inaugural season.

5:Â The Mustangs lost a substantial amount of experience due to graduation last season. In all, five (5) Mustangs were lost to graduation or expired eligibility, including the program’s all-time leading scorer Cheyenne York. In four seasons, York amassed an impressive 24 goals and 11 assists in 76 games. York accounted for eight of the Mustangs 12 goals in 2014.

0:Â Zero (0) makes an appearance in our “By The Numbers” series despite it not being a number. Zero represents the amount of career starts/appearances in net for any of the goalkeepers entering the 2015 season. Henrietta Addo will stand between the pipes for the Mustangs to begin the campaign until projected start Janeesa Jamierson returns from Â an injury.

WELCOME, COACH WORTEH SAMPSON!
Worteh Sampson is not a new face to the Marygrove athletic department despite being named as the fourth head coach in Mustang women’s soccer history on April 4, 2015. Sampson, 34, will take over the helm of the women’s soccer program after spending the last six seasons as the lead assistant coach for Marygrove’s men’s soccer squad. The 2015 season will be Sampson’s first head coaching stint at the collegiate level.

LYNCH AND RUCH TAKE THE LEAD
Senior defenders Brandy Lynch (Dearborn Heights, Mich./Crestwood High School) and Sara Ruch (Oxford, Mich./Oxford High School) will shoulder a big load for the Mustangs heading into the 2015 campaign. With a combined 65 career starts in a Marygrove uniform, Lynch and Ruch make up for 72-percent of the Mustangs total returning starting nods on the 2015 roster.

TALENTED FRESHMEN CLASS
What a haul! After being hired late into the recruiting process, first-year head coach [Worteh] Sampson was able to bring in three key freshmen due to his ties with the local club Plymouth Reign and his time in the local soccer cicruit. Sampson added Westland John Glenn’s Raven Buck â a former all-conference selection for head coach Ralph Cabildo’s squad â as well as Novi’s Allison McDowell and Arbor Prep’s Cayleigh Scott. All three will be inserted into the starting lineup on Tuesday (Sept. 1).

LATE ADDITIONS WILL HELP
Sampson and the Mustangs added a couple late pieces to the 2015 puzzle, led by the commitment of Haiti’s Marie Dimanche. The Haiti-native joined on in mid-August, providing a big boost to the Mustangs plans up top this season. Dimanche is a graduate of the Detroit School of Arts (High School).

A LOOK AT PURDUE CALUMET
The Purdue Calumet Peregrines have struggled out of the gate this season, dropping their first two matches of the season by 3-0 and 6-0 final tallies, respectively. Despite the slow start, the Peregrines return a powerful offense that toppled the Mustangs 6-2 last season in Hammond, Ind. on Sept. 17, 2014. Â The Peregrines’ Kacey Lilly returns this season after netting the game-winning goal against the Mustangs last year.

A LOOK AT BLUFFTON
The Bluffton Beavers, the Mustangs lone NCAA Division III opponent on the 2015 schedule, have yet to play a game at the time of the weekly notes release. The Beavers kick off 2015 play at home on Sept. 1 against Baldwin-Wallace before heading north to take on the Mustangs on Sept. 5. The game will be the Mustangs home opener with live coverage on marygrovemustangs.com/live.

A LOOK AT CLEARY
Hailing from Howell, Mich., the Cleary Cougars are one of the newer teams to the women’s soccer landscape and the second youngest team (in terms of years of existence) on the Mustangs roster to only Lourdes, a first-year program in the WHAC. The Cougars have played one game this season, dropping a 3-0 contest on the at Goshen (Ind.) on Aug. 29. Alexis Whatcott led the Cougars’ charge offensive with four shots, one on target, in a starting role. Keeper Katie Roberts saved nine shots in the 3-0 setback.

KEYS TO THE WEEK
Defense will be key this week as the new-look Mustangs take on a trio of high powered offenses. With a new goalkeeping corps behind them, the Mustangs back four will need to be strong in order for the Green and Gold to find success. Expect newcomer Cayleigh Scott to play a big role in back.

THE MUSTANG SPORTS NETWORK (MSN)
The MSN is back for another year of live video on marygrovemustangs.com/live, this time with expanded coverage including multiple cameras and added talent!