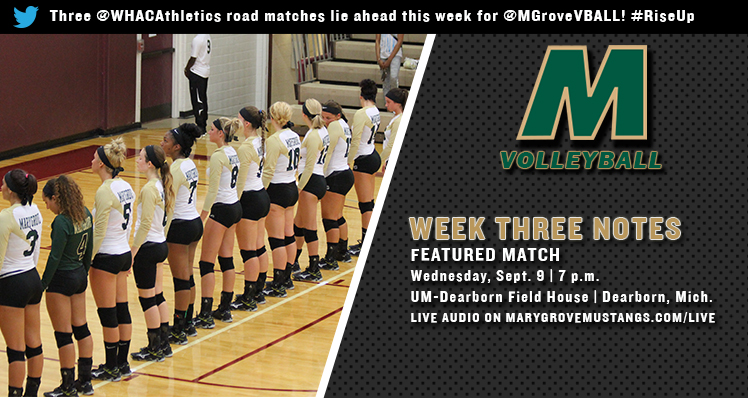 BY THE NUMBERS
2: The Mustangs will welcome junior transfer Brenna Donnelly to the lineup for the first time Wednesday (Sept. 9) when the Green and Gold visit the University of Michigan-Dearborn for the second WHAC matchup of the year. Donnelly will don jersey number two (2) when she hits the floor for the Mustangs, a number last worn by All-WHAC libero Kara Kempinski.

3: Three (3) Mustangs boasting 1.70 kills per set or more from last season return in 2015, including 2014 kills leader Ashley Murphy. Last season, Murphy paced the Mustangs attack with 253 total kills and 2.28 kills per set, while Hailey Brandes and Alixandria Pappas checked in with kills per set averages of 1.84 and 1.70, respectively.

1: Fourth-year head coach Jamie Baker and the Mustangs opened the 2015 season with a 3-0 win over Providence Christian College (Calif.) on Aug. 20 in Arizona. The 3-0 victory marked the first (1) sweep to open a season in program history and was the third time in four seasons the Mustangs picked up a season-opening win during the Coach Baker era.

MUSTANG ROUNDUP
The Mustangs suffered a home-opening sweep at the hands of Lourdes to begin Wolverine-Hoosier Athletic Conference (WHAC) play on Sept. 2. The visiting Gray Wolves â one of the conference favorites in 2015 â hammered down 42 kills in the three-set affair compared to the Mustangs’ 20 kills. Erica Wilson paced the Mustangs with a team-high 10 digs in the conference loss.

INSIDE THE NUMBERS
Ashley Murphy and Rachel Staudt have combined for 54-percent of the Mustangs’ kills production through six matches. Staudt has slammed down 63 kills, the most through the first six matches of a season in program history. View our #infographic below for more!

THE JURY IS OUT…ON JURY
Junior setter Hayley Jury has been solid around the net for the Mustangs this season. Jury has amassed 190 assists to start the season, a number that has helped the team earn a top-five spot in assists per set in the WHAC.

DONNELLY SET TO DEBUT
Former Mott Community College standout and NJCAA All-American Brenna Donnelly is set to make her Mustang debut this week. Donnelly will give the Mustangs a boost after averaging finishing sixth in the nation in hitting percentage (NJCAA, 2013).

DID YOU KNOW?
Former Mustang Millie Velez holds the record for kills in a match with 22 against Concordia-Ann Arbor. The 22-kill match happened on Oct. 23, 2013 at UD-Jesuit.

A LOOK AT MICHIGAN-DEARBORN
Head coach Eric Stark has enjoyed success in his second season after leading the Wolverines out to a 3-7 record to begin the 2015 campaign. In his first season, Stark and the Wolverines suffered through an 0-32 campaign. Shayla Smalls leads the Wolverines with 97 kills through 10 matches, while Megan Wright anchors the defense with a team-best 123 digs.

A LOOK AT NORTHWESTERN OHIO
The University of Northwestern Ohio Racers have played one of the more difficult slates this season around the WHAC, resulting in a 4-9 record overall and 0-1 mark in conference play. Nora Fa’atiga leads a balanced Racer attack with 85 kills.

A LOOK AT CORNERSTONE
The Cornerstone Golden Eagles are one of the top programs in the WHAC and have proved that behind a 4-2 record this season. The Golden Eagles â a team receiving votes in the latest NAIA poll â host the Mustangs Saturday.

THIS WEEK IN MUSTANG HISTORY
Marygrove volleyball finally got over the “Rochester hump” on this week back in 2013 when the Mustangs swept through the competition at the RC Invitational to take home the crown. Winning all five matches, the Mustangs toppled Rochester for the first time in 18 tries.Â

THE MUSTANG SPORTS NETWORK
Watch all home games via live video on marygrovemustangs.com/live â your home for in-game coverage with Jeremy Otto and Brendan Johnson on the call.