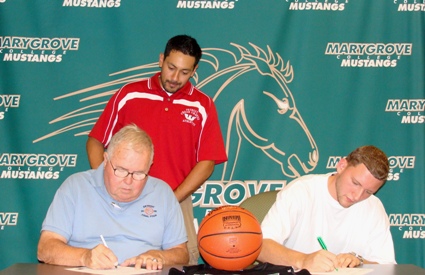 DETROIT, MI–Men’s basketball continued their best offseason in program history on Tuesday when they welcomed another local talent to Marygrove. Justin Reyes, a 2008 Cesar Chavez graduate, signed a letter of intent to join the men cagers for the upcoming season.

Reyes, a 6’3″ versatile combo guard, is a four-year starter that possesses the ball handling skills of a point guard and the range of a shooting guard. Over the course of a stellar high school career, Reyes helped develop Cesar Chavez into a premiere program in the Charter School League. An All-League and All-Conference selection, Reyes helped lead his team to an undefeated conference slate (14-0) in 2008. His guidance would land him with the heralded Aztec Leadership Award at Cesar Chavez. His senior campaign would be capped off with an amazing 30-point 15-assist night against Westin Academy.

Coach Donahue on Reyes: Justin has tremendous potential. He is a very unselfish player who can score and pass as good as anybody. He is the type of player that will get better each day with other phases of the game because of his work ethic. We are pleased to have Justin commit to our program.