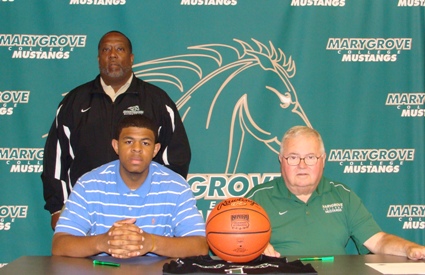 DETROIT, MI–Already being tabbed as the best recruiting class in program history, the Mustang men added two more faces on Thursday. The first to commit was Academy of Oak Park standout Justin Armstrong.

Armstrong comes to Marygrove after a celebrated career as a Ram at the Academy of Oak Park. The 6’4″ versatile forward was second on his team in scoring and helped lead the Rams to a district championship and regional runner-up. Armstrong first hit the radar during his sophomore campaign when he posted 35 points on Allen Academy. He continued the stellar career through his senior year when he tallied 17 points against Cherry Hill in a game that was played at The Palace of Auburn Hills.

Coach Donahue on Armstrong: Justin brings much needed versatility to our team. He is a forward with the athleticism of a guard. Coming from a winning program, Justin gives us the hunger we need in a young player. He is a strong worker that will add a new dimension to our program.