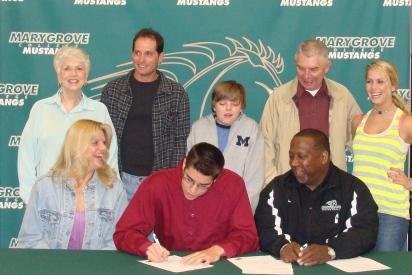 DETROIT, Mich.-On Tuesday, the Mustangs landed their first of what may be three student-athletes from the greater Waterford area with the signing of Brandon Carlson. The former Waterford Kettering standout inked a 2010-11 Letter of Intent in front of 30+ supporters at Kettering’s Performing Arts Center Lobby.

Carlson, a 6’5″ versatile big man, comes to Marygrove with after two successful seasons on the Captains varsity squad. Steady play landed Carlson on back-to-back Kensington Lakes Activities Association (KLAA) All-Conference Teams from 2008-2010. He followed up the first All-Conference honor with a #24 ranking in the 2009-10 Oakland County Top 50 Players list after averaging 15ppg in his junior campaign.

After a fine senior year, Carlson was added to his accolades by being tabbed a member of the Oakland County All-Area Team. Giving college coaches a salivating sendoff, Carlson ended his high school career with a dominant performance against Pontiac High School with a game-high 27 points and 10 rebounds.

“Brandon was a strong player for us that made progress throughout his career. His work ethic and leadership propelled us to a fine season. I am positive the coaching staff and fans will enjoy watching him as a Mustang for the next four years,” said Kettering’s head coach Brian Tass.

Asst. Coach Craig Covington on Carlson: Brandon is a tough post player that possesses the ability to put the ball on the floor. With work, Brandon may be utilized anywhere from the 3-to-5 spots within our scheme. I am excited to sign such a great young man and look forward to coaching Brandon next year.