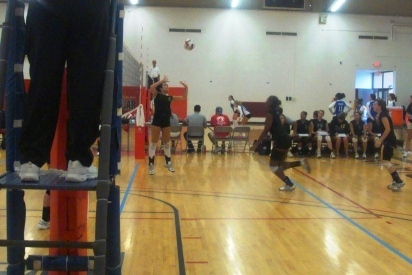 ANN ARBOR, Mich.-Day two of the 2010 Concordia Kick-Off Classic was a lot like day one for the team in green & gold out of Detroit. Another day of competitive matches kicked off at 9am against Ursuline College.

The Arrows were stunned early on by a well-executed Mustang attack. In fact, the Mustangs held mirroring 17-12 leads in each of the first two sets over the recently added NCAA Division 2 institution out of Ohio. However, the late leads could not hold as the Arrows bested the Mustangs, 3-0 (25-22, 25-21, and 25-20).

Game two slated the Mustangs against Purdue University North Central. The Panthers jumped on a tired Mustang squad for a straight-set win.

Despite going 0-for-4 on the weekend, the Mustangs are poised to chalk up many wins this season. The young team continually shows promise, and in spurts shows how dominant they can be down the road once all the pieces come together.

Sophomore Jalissa Favors (Southfield HS/Southfield, Mich.) had a dominant day with 16 kills in two matches. The athletic middle blocker added 5 blocks for the Mustangs on the day as well.

Next up for the Mustangs is a Wednesday (08/25) Tri-Match at Indiana University-Northwest (Gary, Ind.). Game times and additional information will be posted on www.marygrovemustangs.com as soon as the information is available.