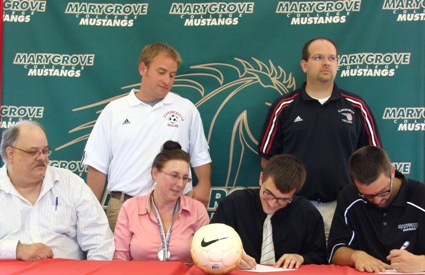 DETROIT, Mich. — The Mustangs opened the 2011-12 season with a bang after drubbing the Gray Wolves of Lourdes University, 75-68. Coach Hitchock and the Mustangs (1-0) used a raucous opening-night crowd to rattle the Gray Wolves (1-2) en route to the victory.

In the first half, the Mustangs and Gray Wolves combined for a less than desirable 37 turnovers and 32 fouls. The shared totals could be contributed to first game jitters for a young Mustangs team. Despite the high totals, the Mustangs were able to take advantage of Gray Wolves miscues and take a 30-25 lead into the halftime break.

The second half of the opening-night tilt saw the Mustangs come out like a well-oiled machine. The Mustangs, fueled by Kaila Corrothers (Detroit, Mich./Owens CC), used a dominant 27-12 run to start the half to gain a 20-point lead, 57-37, with 10:22 to play. Corrothers finished the night with 19 points to lead the Mustangs.

In the end, the Mustangs never let the gritty Gray Wolves take a lead at any point in the game to win 75-68.

Newcomer Adrienne Weaver (Flint, Mich./Mott CC) put on a show in her Mustang debut by tallying 15 points on 5-of-7 shooting. Her effort was followed by junior Keara Marks (Detroit, Mich./Renassiance) who scored 13 points to go along with four rebounds and four assists. Sophomore Andrea Smith (Jackson, Mich./Napoleon) scored 5 points, but played a huge role by snagging 10 rebounds for the Mustangs.

The Mustangs will look to build off their impressive performance this weekend in Upland, IN at the Taylor University Tournament. All the action starts at 5:00pm Friday when the Mustangs take on Aquinas College in a neutral court battle.