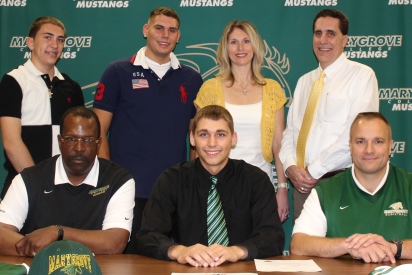 WARREN, Mich. — On Friday (04/20), the Mustangs signed one of their top targets of the 2012 class when Warren Woods Tower standout Joe Zannetti signed a 2012-13 Letter of Intent.

Zannetti, one of many top talents heading to Marygrove next year, signed his letter of intent in front of a large crowd that was highlighted by his family and closest friends.

The 6’1″ crafty shooting guard joins a 2012 class that will compete in the inaugural season for the Mustangs as a member of the Wolverine Hoosier Athletic Conference (WHAC). Zannetti used a strong senior campaign to garner attention from many local colleges after games like his 30-point performance against Lincoln High School earlier this year. The stellar season culminated with Zannetti earning a long list of honors that included: First Team All-MAC Gold Conference, Macomb County Tier 2 First Team All-Star, All-Macomb County Third Team, and Detroit News Eastside Honorable Mention.

After a dominating performance against crosstown rival Fitzgerald High School, Zannetti was named TV Warren State Farm Player of the Game. The game marked one of many strong outings by the senior shooting guard that also held a strong focus in the classroom as a four-time member of the MAC All-Academic Team.

Zannetti is a member of the heralded Team Michigan squad as he continues to prep for his freshman season of college basketball.

Coach Sichterman on Zannetti: Joe is a great young man that has a tremendous support system of friends and family. He is a strong athlete that will transition easily into the NAIA ranks if he continues to work hard on and off the court. This season, we had a chance to watch Joe numerous times and were impressed each time. He was one of our top targets for the 2012 class and we are very pleased to have him as a part of our Mustang Family!