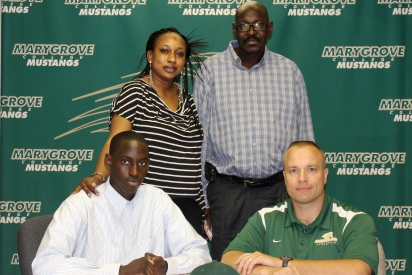 SOUTHFIELD, Mich. — On Monday (05/21), the men’s basketball program inked their seventh commit of the 2012 class when they visited nearby Southfield Lathrup High School to sign Cheikh Ka.

Ka, a 6’5″ long and athletic forward, recently completed two years of varsity play for the Lathrup Chargers, and has taken his game to the AAU level with multiple teams over the past few years. On the AAU side, Ka was a member of the Michigan Eclipse (2010), Southfield Transition (2011), and most recently earned a spot on the well-known Team Michigan squad in 2012. This summer, Ka will help lead Team Michigan into several tournaments â including a potential tournament in Florida.

At Marygrove, Ka also has his sights set on continuing his career in cross country/track & field. In 2011, Ka was named Lathrup’s Cross Country Team MVP before the program disbanded heading into his senior season. On the track, Ka helps pace the Chargers attack in the 1-mile and other mid-distance/distance events. Ka intends on pursuing a pre-med degree in Marygrove’s heralded science department.

Coach Sichterman on Ka: Cheikh has the potential to be a very good player at the NAIA level. If he develops into what we project, Cheikh will be a tough matchup for opponents to cover over the next four years. Physically, Cheikh will need to continue to get stronger to enforce his game at this level. He is a great fit for our program because he is a young man of great character and has shown plenty of initiative throughout the recruiting process. I look forward to coaching Cheikh and the rest of the 2012 class next season.