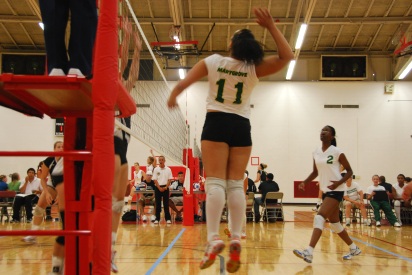 MOUNT VERNON, OH–The Mustang women’s volleyball team was still seeking their first victory in program history heading into Saturday. An exciting day of volleyball would lie ahead as the Mustangs pushed their opponent to the limit.

Game one matched the Mustangs with Ohio State-Newark. The match would be the second Ohio State affiliate the Mustangs would face in the young history of the program. After going (0-6) without winning a set, the Mustangs stayed the course and sought victory. A valiant Mustang effort pushed the Ohio State-Newark team to the brink in set one. A late Newark run would land them a set one victory (25-19).

History was made in the second set as the Mustangs won their first set in program history. The hard-fought (25-22) set two decision brought the match even at one game apiece. OSU-Newark would climb back to take a 2-1 lead in the match after set three.

After falling down 2-1, the Mustangs bounced back to mirror their second set effort for a fourth set win that sent the match into the deciding fifth set.

The fifth set would go down to the wire as only a few points stood between the team and the first victory in Mustang history. With the score tied, 13-13, the Mustangs certainly felt they were on the verge of that elusive first win. However, a couple tough breaks would end in a (15-13) setback as OSU-Newark won the match, 3-2.

The tournament host, Mount Vernon Nazarene University, would square off against the Mustangs in the second and final game of the day. The more experienced Cougars swept the match, 3-0, sending the Mustangs to (0-8) on the young season.