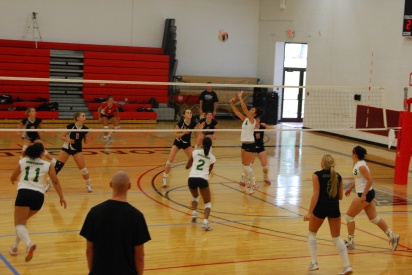 DEFIANCE, OH–Coach Graves and the Mustangs hit the road seeking their first win in program history at the 10th Annual Defiance College Invitational. Day one would pit the Mustangs against fellow NAIA squads Huntington University (IN) and Concordia University.

In game one, the Mustangs would face (2-4) Huntington University. A slow start would hamper the any chances at a first set victory, leaving the Mustangs down 0-1 to start the match. A resilient Mustang effort would setup a battle for game two. A strong showing by the back row got the Mustangs back into the contest and pressured Foresters from Huntington for the first time. A late Forester rally would pin the Mustangs down 0-2 and left little hope for the first match at the DC Invite. The veteran Forester capitalized on Mustang mistakes down the stretch as they cruised to a (3-0) opening match win.

Game two pitted the Mustangs against a familiar foe in Concordia University. The Cardinals squared off against the youthful Mustangs at the season-opening tournament on their home court. The game would end in a decisive (3-0) Cardinal victory. However, Coach Graves and the Mustangs had a different outcome in mind for round two.

A more competitive showing didn’t necessarily mean a different outcome for the Mustangs; rather it proved to everyone that the young team from Marygrove is improving, and fast. Despite a much improved effort, a Cardinal sweep would topple the Mustangs in the nightcap of day one at the DC Invite.

The Mustangs kick-off day two of the invitational with a match against fellow in-state NAIA foe Siena Heights. The Saints would take a split in day one (1-1) and still hope to be in the running for tournament gold. The Mustangs will look to play spoiler in the 10am matchup. The two-day invite will conclude with the Mustangs taking on host Defiance College in a 2pm matinee matchup.