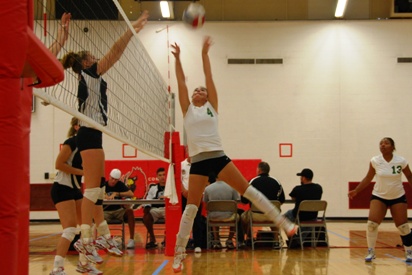 GOSHEN, IN–The Maple Leafs of Goshen College felt little mercy for a well-traveled, tired Mustang team on Saturday. The 10am match caught the Mustangs sleeping as they were swept in straight sets (25-9, 25-12, 25-6).

The Leafs entered the match with a stellar 9-10 record on the season. The Mustangs were unable to get any offense going against the savvy Leaf veterans. Eight blocks and service aces, a 43% hitting percentage, and 21 kills from two players thwarted any attack as the Leafs cruised to the easy win over the inexperienced Mustangs.

The Mustangs return home Tuesday for their 2009 home finale against Kuyper College. Join us for all the action at 7pm Tuesday (University of Detroit Jesuit High).