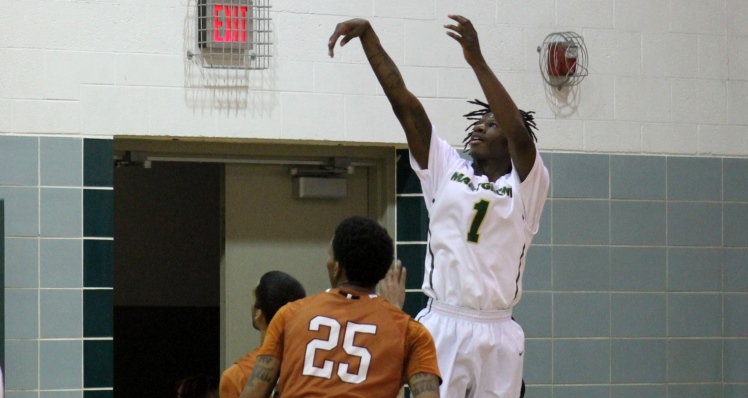 A 21-point first half effort from Dixon on 9-of-13 shooting kept the Mustangs in the game early as they went into the halftime break down six, 43-37. The Mustangs, up by as many six in the opening half, allowed the host Saints to push out to a seven-point lead (42-35) within the final minute of the opening stanza before Dixon answered with a late bucket to make it a two-possession game at the break.

Dixon â along with a stellar effort from JuJuan Armstrong (Detroit, Mich./UM-Dearborn) â brought the Mustangs back to within one at 55-54 with 14:03 remaining in the game as the teams exchanged baskets to start the second half. The Mustangs could never regain the lead, however, as the Saints pulled away behind a 29-18 spurt over the next 10 minutes of play.

Down 12 with just over four minutes remaining, the Mustangs once again chipped away at the Saints lead and cut it to six (94-88) with a minute to play. The Saints would convert their charity stripe tosses down the stretch to hand the Mustangs the 101-89 defeat.

Both teams put on an offensive display in the latter half as Siena Heights outscored Marygrove over the final 20 minute of action, 58-52.

Dixon was red-hot all game shooting 14-of-23 from the floor, including 4-of-8 from distance, to shatter his previous career-high of 29. The 40-point outburst is the most any Mustang has scored since Dennis Foster erupted for 54 points during the 2003-04 season.

Dixon was followed in the scoring column by Armstrong with 19 points. The junior forward added 10 rebounds, four steals and three assists to complete a well-rounded night on the hardwood. Diante Taylor (Battle Creek, Mich./Central) rounded out the double digit scorers for the Mustangs with 10 points, while DeVonte Pryor (Pontiac, Mich./West Texas A&M) contributed nicely with eight points and five assists.

Siena Heights was balanced on their way to the century mark with five in double figures.

The Mustangs will remain on the road for the next contest when they visit Lima, Ohio, to take on the Racers of the University of Northwestern Ohio. The game is scheduled for a 3 p.m. Saturday (Feb. 15).