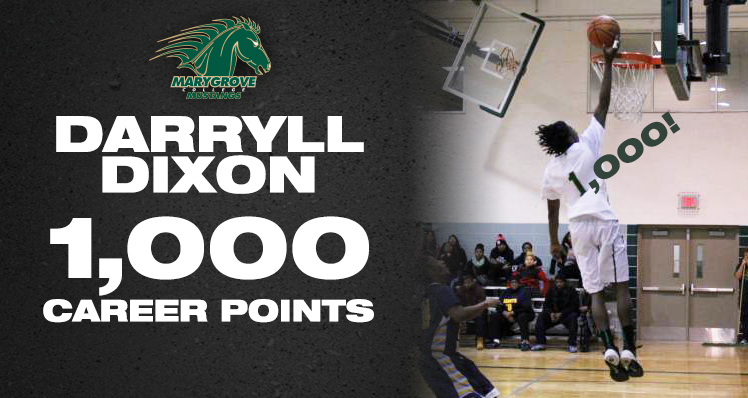 LIMA, Ohio — There was a silver lining in Saturday’s (Feb. 15) 103-74 setback at the University of Northwestern Ohio when junior guard Darryll Dixon (Flint, Mich./Hamady) became the sixth men’s basketball player in Marygrove history to eclipse 1,000 career points. Dixon went over the 1,000-point mark in Saturday’s game after nearly achieving the mark in Wednesday’s 40-point explosion against Siena Heights. The 40-point game was the most points scored by a Mustang since Dennis Foster in 2004.

In the first half Saturday in Lima, Ohio, sophomore guard Diante Taylor (Battle Creek, Mich./Central) and junior forward JuJuan Armstrong (Detroit, Mich./UM-Dearborn) carried the offensive load in an otherwise tough first half for the Mustangs. Taylor tallied 15 first half points and Armstrong followed with 10 of his own, but the Mustangs found themselves down big at the half, 57-36.

The 21-point hole at the half was due in part to eight early turnovers by the Mustangs as the team was unlucky for much of the opening 20 minutes. The Racers used a 9-2 edge in points off turnovers and a 26-4 bench advantage to jump out to the big halftime lead.

The Racers kept their foot on the pedal in the second half, eventually ballooning their lead over the Mustangs to as many as 31 points in the 103-74 WHAC setback. The Mustangs were outdone by an aggressive Racer team that outscored the Green & Gold 40-22 in the paint and 49-10 in bench scoring.

Taylor, a consistent presence for head coach Craig Covington all season, led the Mustangs with 23 points, four rebounds and three steals in 36 minutes of action. The 23-point effort lifted the sophomore’s career points total to 813.

Armstrong followed Taylor with 14 points, five assists, four steals and a pair of rebounds, while Kenny Enoex (Warren, Mich./Fitzgerald) tallied 10 points to go along with four boards and a block.

UNOH was led by Johnny Elliott with a game-high 25 points.

With the final road trip of 2013-14 complete, the Mustangs will return to Detroit’s Northwest Activities Center for their final two games of the season Wednesday (Feb. 19) at 7:30 p.m. and Saturday (Feb. 22) at 3 p.m. Saturday’s game marks Senior Day 2014 for the Mustangs’ four seniors: Kenny Enoex, Eric Fowlkes, Kevaunte Moore and DeVonte Pryor. The Senior Day ceremony will take place five minutes prior to the men’s game.