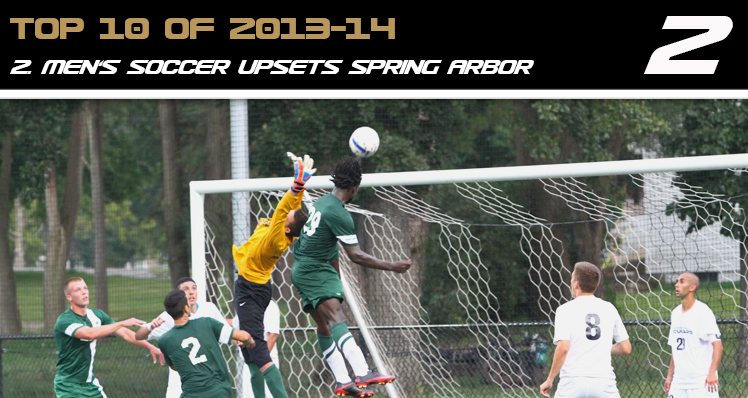 The top of our countdown is garnering plenty of attention as individuals and teams believe they should be in the top spot(s). The number two spot belongs to our 2013-14 Game of the Year â the men’s soccer comeback upset over then-ranked Spring Arbor on the road. Spring Arbor, fresh off an upset of the nation’s No. 1 team, Lindsey Wilson College, was set to host a Mustang team they defeated in Detroit by a 4-1 final 364 days beforehand. After falling behind 1-0 in the second half, the Mustangs used a late rally behind a goal from Oneil Robinson and an eventual game-winner from Jad El-Zein.

El-Zein would go on to earn WHAC Player of the Week honors after he helped the Mustangs top the Cougars, 2-1, behind his goal and an earlier assist to set up Robinson’s strike. Ahmed Almosawi crossed a great ball into the box for El-Zein in the 82nd minute to help the Mustangs to arguably their biggest upset in program history. As the story goes most of the time with soccer, the defense was the unsung hero of the match as strong play from Gaoussou Cisse, Ysen Dalipi, Moussa Diallo, Ali El Habhab, Chad Lane, and more, thwarted all but one chance by the host squad as time ticked down.

SPRING ARBOR, Mich. –Â The Mustangs moved to 2-0 on the season thanks to another come from behind victory against a top NAIA opponent. The suspenseful 2-1 road victory over the Cougars of Spring Arbor University (1-3) gave the Mustangs a key early season win against a team that defeated the NAIA’s #3 team in the preseason Top-25 a week ago. Fifth year head coachMatt JohnsonÂ and the Mustangs rose to the occasion and came from behind for the second time in as many games this season to secure the victory over a Cougar team that ranked just outside of the NAIA’s Top-25.

Having the feeling of a playoff contest, both teams came out of their respective lockerrooms knowing the Friday night tilt was a key cog to their early season plans for success. The first half featured a physical back-and-forth battle as the team’s looked to get a feel for each other and the pace of the game.

Getting the starting nod once again, freshmanÂ Ryan PlonkaÂ (St. Clair Shores, Mich./Macomb CC) stepped up early and often for the Mustangs in his second consecutive game in goal. The freshman kept out an early scoring chance with a leaping save which left the ball floating off his fingertips and over the crossbar. Plonka’s play was huge as the Cougars would not generate another sound opportunity until the second half.

Perhaps the Mustangs best chance in the first half came whenÂ Abdoulie Jallow(Bansang, The Gambia/Rust) tried to knock one in with his left boot from a difficult 15-foot angle. The shot was turned away by the Cougars’ keeper to keep the score deadlocked at the half, 0-0.

The Mustangs found themselves down 1-nil for the second straight game when the Cougars lit up the scoreboard at the 69:21 mark in the second half via penalty kick. Marygrove answered minutes after the Cougar goal to steal momentum back from the home team. Reigning USCAA Player of the WeekÂ Jad El-ZeinÂ (Tyre, Lebanon/Dearborn Fordson) slotted a ball through the box to sophomoreÂ Oneil Robinson(Montego Bay, Jamaica/Cornwall) who beat the keeper to his right to tie the game at one. The goal would come just five minutes after Spring Arbor snuck their PK past Plonka.

Minutes later, El-Zein would come up with another clutch play for his team. The senior captain scored his third goal of the 2013 season when his 81stÂ minute header found the back of the net. The header goal was El-Zein’s second of that variety on the young campaign. His other goal came on a bicycle kick against Taylor. El-Zein’s game-winning header against Spring Arbor was made possible by a ball played in from the left by fellow seniorÂ Ahmed AlmosawiÂ (Dearborn, Mich./American Muslim Academy). The assist marked Almosawi’s first point of 2013.

With 59 seconds to play, a Cougar goal was waived off after the linesman called the hosts offside. Plonka and the defense played the set piece perfectly as they marched forward to leave a Cougar on the post for the offside call. The Cougars would not get another chance on net as the Mustangs would go on to beat the team that was ranked just outside the NAIA’s Top-25.

Plonka would total three saves on the night to secure his second collegiate win.

Brandon HerberÂ (St. Clair Shores, Mich./Macomb CC) andÂ Alex CabildoÂ (Westland, Mich./Schoolcraft) came on to give Johnson valuable minutes. Herber, playing in his second game with the Mustangs, had a solid scoring chance early as his run into the box put a great deal of pressure on the Cougar backline.

The win over the Cougars is the first in three meetings between the clubs. Coach Johnson and the Mustangs move on to Chicago to compete in the Crimson Wave Invite hosted by Calumet College of St. Joseph. The first of two contests at the invite will be played Saturday (Aug. 31) at 5:30 p.m. EST against nearby counterpart, Rochester College. The Mustangs will play either the host Crimson Wave or Clarke (Iowa) depending on each game’s outcome Saturday afternoon. Catch all of the action on the Crimson Wave’sÂ live video feed.