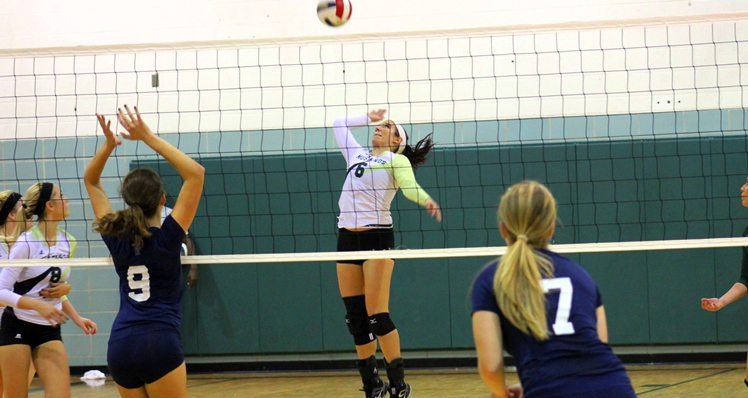 The Mustangs entered Friday’s WHAC tilt without captain Alixandria Pappas (St. Clair Shores, Mich./Lakeview High School) who went down with an injury in the midweek match at Lawrence Tech.

Despite not having one of their leaders on the floor, the Mustangs rallied together to win an exciting first set by a 26-24 margin. The Mustangs won the first set behind stellar play from Kiara Cobbs (Detroit, Mich./King High School) who accounted for six points off of her set-high five kills and a block assist.

The Saints roared back in the second set, cruising to a 25-8 win to even the match a one set apiece. An 11-kill performance and .226 hitting percentage led the Saints to the second-set win after the Mustangs struggled to a four-kill, eight-error frame.

The teams would battle tightly in the third, but the Saints never relinquished their early lead to go up two-sets-to-one behind a 25-19 decision.

A determined Mustangs team â led by a strong defensive effort from Alyssa Adkins (Melvindale, Mich./Melvindale High School), Amber Kelly (Mt. Morris, Mich./Mt. Morris High School), Kara Kempinski (Livonia, Mich./Schoolcraft College) and Nicole Kempinski â attempted to will their way to a deciding fifth-set but were deterred thanks to a late Saints rally. Up 23-20 and ready to send the match to five sets, the Mustangs gave the serve back to the visitors and the Saints never looked back, stealing the match behind a 25-23 fourth-set victory.

The Mustangs put forth tremendous effort despite falling in four sets to the Saints, and were led by sophomore outside hitter Ashley Murphy (Southfield, Mich./Clarenceville High School) with a match-high-tying 12 kills to go along with seven digs. Cobbs would follow Murphy with 10 kills, while Hailey Brandes (Southgate, Mich./Anderson High School) and Paige Hughes (Belleville, Mich./Huron High School) added seven and five kills, respectively.

Strong all night, the defense was anchored by [Kara] Kempinski with a match-high 22 digs. Kelly and [Nicole] Kempinski each added 12 digs on a night where the defense frustrated the opposition. Hayley Jury (Plymouth, Mich./Ladywood High School) tossed up a team-high 23 assists in the narrow four-set defeat.

Halie Baker led the visitors attack with 12 kills and Carly Tillotson added a match-high 35 assists to help the Saints earn their sixth WHAC victory of the season.

The Mustangs will return to Northwest Activities Center tomorrow (Oct. 4) for a 1 p.m. matinee match against the Aquinas Saints. The match kicks off a Marygrove athletics doubleheader on the Mustang Sports Network with coverage beginning at 12:50 p.m. Jeremy Otto and crew will head to cover Marygrove men’s soccer at home against NAIA No. 2 Davenport beginning at 3:50 p.m.