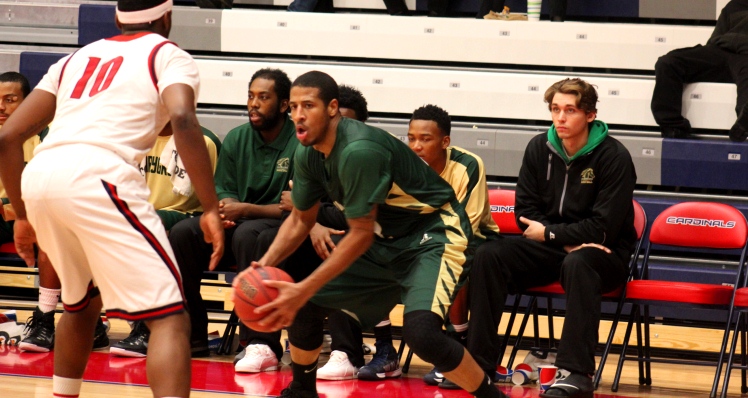 UNIVERSITY CENTER, Mich. — Second-year head coach Craig Covington and the Mustangs closed out 2014 play Sunday (Dec. 21) with a non-conference visit to NCAA Division II Saginaw Valley State University (SVSU) inside the Cardinals’ O’Neill Arena. The Mustangs (3-12) went toe-to-toe with the Cardinals for a half before the hosts pulled away to win, 93-70, behind a 26-11 run to begin second-half play.

The Mustangs opened Sunday’s matinee matchup riding the hot hand of senior guard Darryll Dixon (Flint, Mich./Hamady High School). Dixon shot out to eight early points, keeping the Mustangs to within six, 16-10, with 14:12 left to play in the opening half. Dixon’s eight-point burst was followed up by a timely jumper from junior wing Diante Taylor (Battle Creek, Mich./Central High School) to cut the team’s deficit to four, 16-12, with 13:17 showing on the first-half clock.

The four-point deficit ballooned to 16 points as the Cardinals took a 41-25 lead off of a Devin Dixon lay-in with just 1:47 remaining in the first half.

Tyler Sykes (Sterling Heights, Mich./Stevenson High School) led a comeback from there, tallying four of the Mustangs’ next seven points to bring the Green and Gold to within nine at the halftime break, 43-34. Sykes’ four-point spree was a product of a pair of steals as the redshirt freshman added an assist on the Mustangs other basket in the 7-2 run to end the opening half.

The Cardinals pulled away from there, opening the second half on a 26-11 run to take a commanding 69-45 lead with 9:55 remaining in the contest. After going down by as many as 27 points on two occasions, the Mustangs never quit to bounce back defensively late in the contest. The defensive effort cut into the hosts lead, but the Cardinals had too much to offer offensively to win the non-conference contest by 23 points.

The larger NCAA DII opponent took home a 54-30 scoring advantage in the paint, as well as a 35-7 edge in bench scoring. The pair of team stat lines, combined with a 61.3% effort from the floor, was enough to for the Cardinals to pull away from the Mustangs Sunday afternoon.

Dixon paced the Mustangs with a team-high 22 points, while Taylor followed closely with 18 of his own. Senior forward JuJuan Armstrong (Detroit, Mich./Michigan-Dearborn) tallied 15 points and added four rebounds in 28 minutes for the Mustangs.

The Cardinals were led by C.J. Turnage with a game-high 26 points.

Covington and the Mustangs will return to the hardwood Jan. 5, 2015 at home when they host WHAC foe Davenport (Mich.) at 8 p.m.