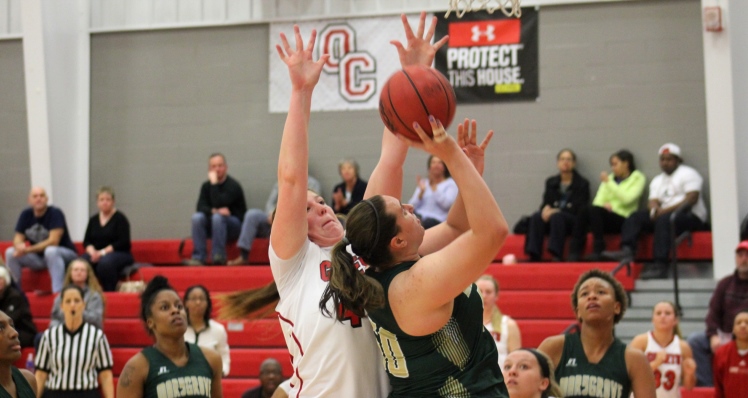 DETROIT — Marygrove women’s basketball completed the season sweep over the Michigan-Dearborn Wolverines Saturday (Jan. 24) with a come-from-behind 73-67 victory in Detroit. The win moves the Mustangs to 4-18 overall and 2-12 in the WHAC while the Wolverines fall to 3-19 and 1-13 in conference play. The four-win campaign marks the most successful season since the women’s basketball squad went 13-15 in 2011-12.

THERE’S MORE TO THIS STORY
The win was also the first home triumph for the Mustangs this season after starting the 2014-15 slate 0-for-6 inside Northwest Activities Center. Coach Covington and the Mustangs set a new record for WHAC wins in a single season by earning two â both coming against the Wolverines â as the women’s basketball program pulls to 2-56 all-time in one of the NAIA’s toughest conferences.

A SLOW START
After trading baskets with the opposition to open the game, the Mustangs were staring up at an eight-point deficit, 22-14, as the Wolverines’ Courtney Teets drained back-to-back baskets in the paint with 6:33 remaining in the first half. Micaiah King (Detroit, Mich./Wayne County CC) was the key to the Mustangs’ first half efforts. The junior forward was on fire in the first half, dropping in eight points and pulling down eight rebounds to help pull the Mustangs to within four at the break, 27-23.

CALL IT A COMEBACK!
Ball movement and timely shots enabled the Mustangs to get back in to the game after trailing by double digits in the early going. The Mustangs tallied an in-conference high 14 assists in Saturday’s game â two of which came on back-to-back three pointers to help the Mustangs earn the win.

Down eight in the second half, the Mustangs continued to inch back into the contest behind balanced play and an outstanding performance at the free-throw line from Raeha Weaver (Battle Creek, Mich./Kellogg CC). With the Mustangs down four under two minutes to go, Weaver connected on a well-timed three-point basket off of an Elisha Major (Flushing, Mich./Flushing High School) assist with 1:40 remaining on the second half clock.

Weaver’s three brought the Mustangs to within one, 67-66. Defense would take over from there as the Mustangs held the Wolverines scoreless over the final 1:53 to allow for a key play in the waning seconds.

THE KEY PLAY
The Mustangs gained the lead for the first time since the 16:42 mark of the first half with only 32 seconds remaining as junior guard Tiffany Bradford (Detroit, Mich./Dakota College) drained a bucket from three-point territory. The three was the third of the game for Bradford as senior forward Janeesa Jamierson (Battle Creek, Mich./Kellogg CC) found the sharp-shooting junior in the corner for one of the biggest shots of the season.

SCORES, STATS AND MORE!
Sophomore center Theresa Dray (Davison, Mich./Davison High School) was on a roll Saturday, pouring in a career-high 10 points on a 5-of-8 performance from the field. Dray tallied eight of her 10 points in the second half to help the Mustangs climb back into the contest after being down big on multiple occasions.

Weaver led the Mustangs with a team-high 15 points while adding five steals, five rebounds and three assists. The senior guard was locked in from the free throw line, knocking down 10-of-12 charity stripe tosses on the afternoon. Weaver was followed by three Mustangs at the 10-point mark in Dray, Kierra Jordan (Westland, Mich./John Glenn High School) and King.

King pulled down a game-high 12 rebounds and Jordan corralled nine of her own to help the Mustangs win the rebounding battle for only the fourth time all season. Dray finished with six rebounds to accompany her career day on the offensive end.

The Wolverines were paced by Jalissa Williams with a game-high 20 points. Courtney Teets followed closely with 19 points and a team-high nine rebounds.

Bench scoring was key as the Mustangs outscored the Wolverines 22-5 to help notch their second conference win of the season. The Mustangs also came back to own the paint behind a 34-28 edge at the end of Saturday’s contest, while also taking a 25-to-15 advantage in second-chance points.

UP NEXT
The Mustangs remain in Detroit for a Wednesday (Jan. 28) matchup against NAIA No. 22 Madonna University at 6 p.m. The weeknight WHAC tilt will be featured on the Mustang Sports Network beginning at 5:50 p.m.