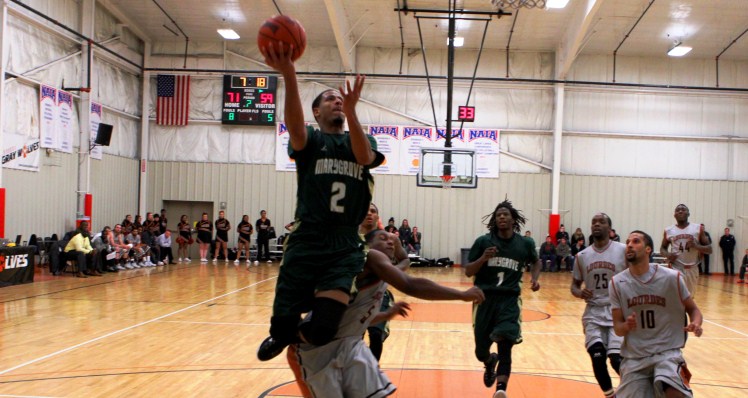 SYLVANIA, Ohio â Rebounding was once again a factor as the undersized Marygrove men’s basketball program fell to the host Lourdes Gray Wolves by an 83-73 final tally on Wednesday (Feb. 11) inside the Tam-o-Shanter Center in Sylvania, Ohio. The Gray Wolves out-rebounded the Mustangs 54-34, leading the hosts to victory behind a 56-32 advantage in points in the paint and a 25-12 edge in second-chance points.

Steinmetz’ dominant half helped the Gray Wolves fend off a couple Mustang runs as the hosts held a 41-34 lead over the Green and Gold heading into halftime.

The Mustangs were balanced offensively in the first half as Diante Taylor (Battle Creek, Mich./Central High School) led four players with five-or-more points by dropping in nine of his own in 19 minutes.

Rebounding was the difference in the first half as the Gray Wolves owned a 29-15 advantage overall and a 10-4 edge in offensive boards to hold off the Mustangs throughout the opening stanza.

The Mustangs battled back to get within six, 73-67, when Taylor connected on a layup off of a nicely-placed Kenneth Miller (Grand Blanc, Mich./Grand Blanc High School) assist. Down two possessions, the Mustangs went cold from the line to allow the Gray Wolves to close the game on a 10-6 burst to hold off the Green and Gold late.

Steinmetz led all scorers with a career-high tying 30 points and added a career-best 20 rebounds to help the Gray Wolves hold on to the 10-point conference win. Jake DuPree tallied 20 points and 10 rebounds, combining with Steinmetz for 30 boards from the pair â only four shy of the Mustangs team total for the night (34).

The Mustangs return to action Saturday (Feb. 14) at 3 p.m. when they play host to Cornerstone. The Mustang Sports Network will carry the game via live video on marygrovemustangs.com/live beginning at 3 p.m.