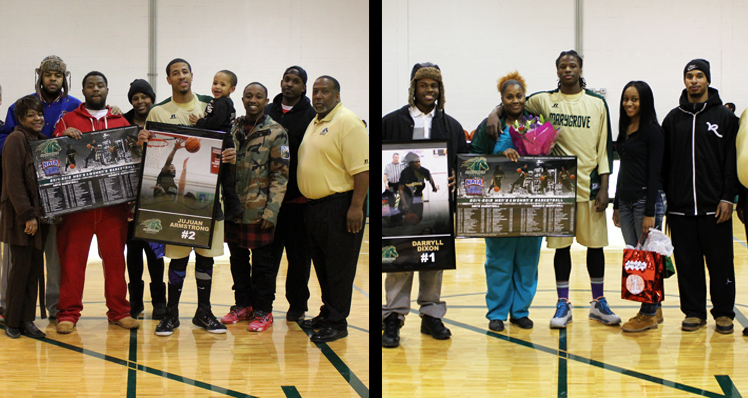 STAY CONNECTED:Â FacebookÂ |Â TwitterÂ |Â InstagramÂ |Â YouTube
BE THE FIRST TO KNOW:Â Text & Email Alerts
DOWNLOAD OUR FREE APPS:Â iOS (iPhone/iPad)Â |Â Android Â  DETROIT — Wednesday (Feb. 18) marked the end of the 2014-15 home campaign for Marygrove men’s basketball as the Mustangs celebrated Senior Night to honor two seniors, JuJuan Armstrong and Darryll Dixon. The Mustangs, led by the pair ofÂ seniors, took a three-point lead into the halftime break before succumbing to a three-pointÂ barrage in the second half as the visiting Concordia Cardinals pulled away to win, 94-81, inside Detroit’s Northwest Activities Center.Â The Mustangs fall to 3-26 overall and 1-20 in WHAC action with the setback. The win lifts the Cardinals to 16-12 on the season and 13-8 in the conference.Â Four lead changes and four ties highlighted a highly-competitive first half as the Cardinals and Mustangs never pulled ahead by more than two possessions.Â Â The Cardinals took their largest lead of the opening half when Josh Fugate connected on a transition layup with 6:18 remaining to put the visitors up, 31-25. The Mustangs battled back to take a one-point lead behind a pair of Diante Taylor (Battle Creek, Mich./Central High School) layups and a three-pointerÂ by newcomer Ta’Kein Dixson (Atlanta, Ga./Loganville High School). The Mustangs went ahead by four, 39-35, with one minute remaining in the first half whenÂ Dixon (Flint, Mich./Hamady High School) drained a deep three.Â Â The Cardinals converted on one-of-two free throws to cut the Mustangs lead to three at the half, 39-36.Â Armstrong (Detroit, Mich./Michigan-Dearborn) paced the Mustangs in the opening half with a hard-fought 10 points and five rebounds. Four other MustangsÂ tallied six or more points to lift the Mustangs to the narrow halftime lead.Â The Cardinals opened the second half with a flurry of threes, led by Fugate’s three second-half triples to lead the visitors to a 26-10 run over theÂ opening six minutes of the latter stanza. The strong start to the second half was all the Fugate and the Cardinals needed to pull away from the upset-minded Mustangs in the 13-point conference win.Â Points in the paint belonged to the much larger Cardinals squad, 58-40, while the Mustangs kept things close with a 15-9 edge in points off turnovers. TheÂ difference in the game was the Cardinals depth as the visitors’ reserves outdueled the Mustangs to a 30-4 advantage in bench scoring.Â Dixon torched the nets for a game-high 27 points, adding four rebounds and three assists in 35 minutes. Armstrong followed his fellow senior with 17 pointsÂ and seven rebounds, while Taylor checked in with 14 points and seven boards. Dixson rounded out the double-digit scorers for the Mustangs with 10 points inÂ 28 minutes.Â Fugate led the Cardinals to victory with 22 points.Â The Mustangs close out the 2014-15 campaign Saturday (Feb. 21) at NAIA Division II No. 4 Davenport at 3 p.m.Â  MEN’S BASKETBALL CONTACT: Tim Johnston |Â [emailÂ protected] /* */Â |Â @tjohnston56
MARYGROVE BROADCASTS:Â Mustang Sports NetworkÂ |Â Twitter
SOCIAL MEDIA:Â Men’s Basketball on Twitter