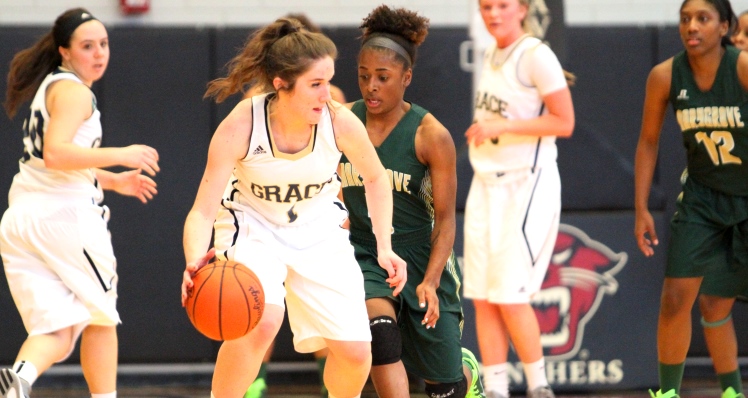 GRAND RAPIDS, Mich. — The 2014-15 season came to a close Saturday (Feb. 21) with a 96-42 road loss to No. 2 Davenport. The Panthers home win over the Mustangs kept their pursuit of perfection intact as they moved to 28-0 overall and 22-0 in the WHAC in the 54-point conference decision. The Mustangs ended the season with a 4-26 record overall and a 2-20 mark in conference action.

Playing in her final game at the college level, senior guard Raeha Weaver (Battle Creek, Mich./Kellogg CC) was on fire early en route to tallying the first 10 points for the Mustangs in Saturday’s conference matinee. Weaver’s strong start brought the Mustangs to within one, 11-10, at the 14:25 mark of the first half before the Panthers took over. The Panthers proved why they completed a perfect regular season by pushing out to a 39-10 lead at the 6:04 mark after putting together a commanding 28-0 run over an eight-minute stretch in the first half.

The Mustangs stopped the furious 28-0 run by the hosts with 5:41 remaining in the opening half when junior guard Elisha Major (Flushing, Mich./Flushing High School) drove the lane for a layup off of a Weaver assist. The bucket by Major was also the first for any Mustang not named Weaver in the game as the Mustangs trailed 39-12 with less than six minutes left in the first half.

Weaver would soon pick up three first-half fouls to send the Mustangs lone consistent scorer in the contest to the bench. The Panthers took advantage of the Weaver-less Mustangs to post a 43-17 lead at the halftime break.

The Mustangs received three points from Major and two each from Tiffany Bradford (Detroit, Mich./Dakota College) and Kierra Jordan (Westland, Mich./John Glenn High School) after the opening 10-point burst by Weaver to account for all 17 points in the opening half for second-year head coach Craig Covington and the Mustangs.

The Panthers, producing 15 points off 15 turnovers by the Mustangs in the first half, were paced by Daina Grazulis with 16 points on 6-of-9 shooting. The turnover edge, combined with a 26-6 advantage in paint scoring, lifted the Panthers to the 26-point halftime lead.

Led by a game-high 21 points for Grazulis, the second-ranked Panthers continued to roll in the second half to post a 96-42 victory over the Mustangs.

Weaver finished the final game of her collegiate career with a team-high 17 points to go along with five rebounds. Fellow senior Janeesa Jamierson (Battle Creek, Mich./Kellogg CC) put a cap on her collegiate career by dropping in four points and pulling down a team-best nineÂ rebounds in the season-ending conference defeat.

The Mustangs finished the game with 32 turnovers, which turned into a 30-5 advantage in points off turnovers for the Panthers.