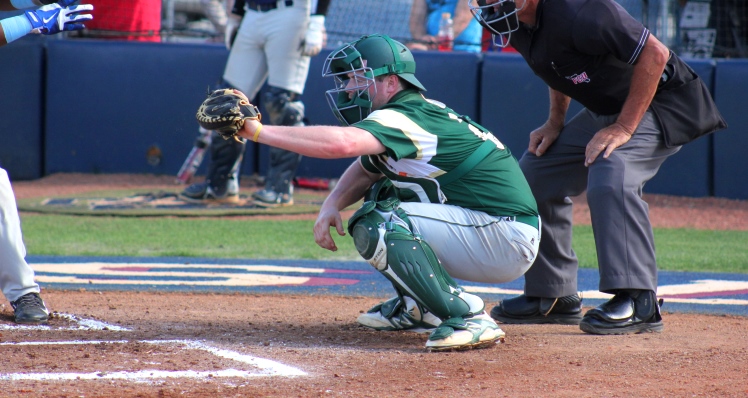 MIAMI GARDENS, Fla. — One day after nearing tallying the program’s first win, Marygrove baseball was back at it Wednesday (Mar. 4) with a doubleheader against one of The Sun Conference’s top teams, St. Thomas. The host Bobcats fended off the upstart Mustangs in game one, 7-2, before winning the nightcap by an 11-1 final. The Bobcats,Â winners in nine of their last 10 outings, pushed their overall record to 14-5 with the wins of the Mustangs (0-5).

GAME ONE â St. Thomas 7, @MGroveBASEBALL 2
A six-run third inning doomed the Mustangs in game one as the host Bobcats used the solid frame to earn a 7-2 victory. For the third time in four games, the Mustangs were able to jump on top first by taking a 1-0 lead in the second inning after Jacob Baker (Berkley, Mich./Berkley High School) started it off with a single. Baker’s single was followed by walks from Chris Gittleman (Windsor, Ontario/Trinity Christian College) walk and Mavrick Dube (Warren, Mich./Mott High School) â effectively loading the bases for the Mustangs with one out.

Freshman outfielder Drew Johnson (Trenton, Mich./Trenton High School) hit a chopper down the third base line that was bobbled to help Baker plate the Mustangs first run of the contest before the inning was ended by a double play by the Bobcats.

The Mustangs took the narrow 1-0 lead into the bottom half of the third, but the Bobcats pounced with six runs on only two hits as the Green and Gold committed a pair of costly errors leading to the big inning. The six-run outburst put the veteran Bobcats in front for good to secure the 7-2 victory.

The Bobcats tallied their seven runs off six hits, leaving eight on base as the Mustangs continued to battle throughout. The Mustangs countered with four hits and a pair of runs, leaving six stranded as Bobcats’ starter Devon Stubbings lasted four innings to earn the win.

Jon Weatherspoon (Ann Arbor, Mich./Huron High School) got the ball from head coach Ryan Kottke, givingÂ up five hits and four earned runs with a pair of strikeouts in 4 2/3 innings.

GAME TWO â St. Thomas 11, @MGroveBASEBALL 1
The Mustangs battled once again despite falling short to St. Thomas, 11-1, in the nightcap behind a seven-run fourth inning by the Bobcats. The seven-run frame gave the Bobcats 13 of their 18 runs in two innings (six-run third inning in game one) as the Mustangs’ miscues caught up with them in each game.

Josh Barnes (St. Clair, Mich./St. Clair High School) got the start and fell to 0-1 on the season while his counterpart Andrew Denis of St. Thomas pitched five innings of three-hit baseball despite only striking out one Mustang.

The Mustangs will culminate their inaugural spring trip with a doubleheader at Florida Memorial beginning at 12 p.m. The Mustang Sports Network will once again be there to call the game live on marygrovemustangs.com/live at 11:50 a.m.