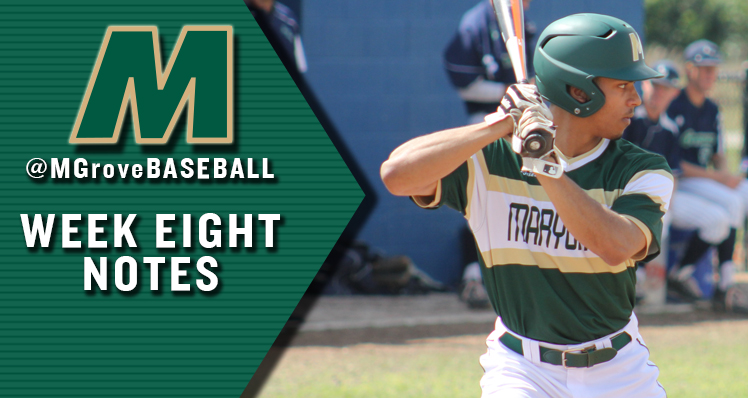 BY THE NUMBERS
12:Â Freshman outfielder Drew Johnson (Trenton, Mich./Trenton High School) has been on a roll as of late for Kottke and the Mustangs. The speedy freshman has recorded a hit in 12 of the last 13 games, including a three-hit explosion at Aquinas on April 17. Johnson came up a home run shy of the cycle after hitting a single, double and triple in the April 17 game against Aquinas.

5: Known more for his outstanding, and surprising, job on the mound this season, freshman utility man Trey Blandford (Louisville, Ky./Fern Creek High School) has done a lot to impress the staff early in his career. The freshman has appeared a team-high 20 times on the mound, but his recent five-game hitting streak could land the Kentucky native in the lineup more often.

HAVE A DAY, RALEIGH WILSON!
Sophomore outfielder Raleigh Wilson made history by jacking a pair of home runs on Saturday (April 18) in Wyoming, Mich. when the Mustangs took on Aquinas College. Wilson’s historic homers â the first in program history â provided plenty of excitement as the Â young Mustangs continue to improve as the season rolls on. Wilson raised his slugging percentage to .371 after hitting the pair of solo shots over the weekend.

REMAINING HOME GAMES/SERIES
The inaugural season has been full of highs and lows for the Mustangs as the program embarks on a future that promises to be very bright. As the season winds down, only a few home games remain on the 2015 calendar, including this weekend’s set with Indiana Tech (April 25-26) at Madonna’s Ilitch Ballpark. The Mustangs will also be home April 30-May 1 opposite Lourdes to celebrate Senior Day.

GETTING OVER THE HUMP
Head coach Ryan Kottke and the Mustangs have not backed down from day one, facing some of the NAIA’s top teams, including No. 3 Northwood (Fla.), No. 23 St. Thomas (Fla.), No. 24 Northwestern Ohio and lastly No. 2 Davenport (Mich.). The games against some of the nation’s top teams has allowed the young Mustangs to grow, evidenced by the Green and Gold’s recent close contests with fellow WHAC counterparts. The Mustangs were close to victory Saturday (April 18) at Aquinas, falling in the latter innings, 4-2.

FRESHMAN PITCHING IS ON THE RISE
Freshmen pitchers Daniel Bailey, Jacob Baker and Ryne Underwood have all put forth stellar efforts late in the year, including five combined complete games. Baker has given up three or less earned runs in nine outings this season, while Underwood has done so on four occassions.

DID YOU KNOW?
The first hit in program history was recorded by David Chung. The freshman infielder broke up a potential no-hit bid in the first game of 2015 with a double down the left field line.

A LOOK AT SAGINAW VALLEY STATE
The Cardinals of Saginaw Valley State University (SVSU) will go down in history as the first NCAA Division II opponent on the schedule for Marygrove baseball. Led by first-year head coach Chris Ebright, the Cardinals own a 15-16-1 overall record and a 10-13-1 mark in Great Lakes Intercollegiate Athletic Conference (GLIAC) play. Chad Carson paces the Cardinals offense with a .383 average and a .525 slugging percentage.

A LOOK AT INDIANA TECH
The Warriors of Indiana Tech enter the week one of the hottest teams in the conference after winning five of their last six outings, including a 29-5 dismantling of conference foe Siena Heights on April 17. The Warriors are led offensively by reigning WHAC Player of the Week Romer Portes with an impressive .377 batting average to go along with a .732 slugging percentage and 52 RBIs.

A LOOK AHEAD…
Outside of a large and highly talented 2015 recruiting class, the Mustangs will receive a boost heading into the 2015-16 campaign from a few key pieces already at Marygrove. Junior utility man Malik Jackson, sophomore right-handed pitcher Reed Banner, and fellow righty Travis Tarrence are all expected to make a big impact next season after sitting out 2015 due to transfer rules. Banner has previous WHAC experience at Siena Heights, while Jackson hit .280 with 16 steals a season ago at Macomb Community College.

BASEBALL VS. Â OTHER FIRST YEAR TEAMS
At 2-37, the Mustangs are on target to achieve similar first-year status compared to other Marygrove teams outside of the year-one national champion women’s soccer team. Now a perennial power in the WHAC, the Mustang men’s soccer team finished their inaugural campaign 4-11 with no NAIA wins.

EXTENDED COVERAGE ALL SEASON!
Join Jeremy Otto, Jimmy Stewart and Brendan Johnson as they bring you Marygrove baseball on the Mustang Sports Network at marygrovemustangs.com/live!