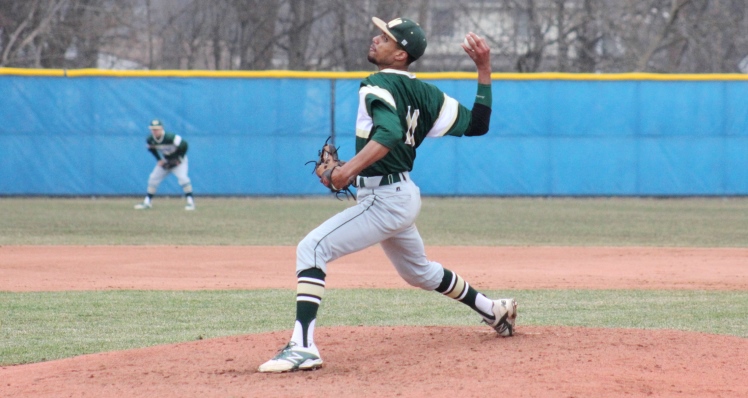 LIVONIA, Mich. — In a near mirrored outing from a day prior, Marygrove baseball fell twice to the visiting Indiana Tech Warriors by a 14-2 final in game one and a 3-0 pitchers’ duel in the latter game of Sunday’s (April 26) WHAC doubleheader. The Mustangs lost both games on Saturday to open the four-game set in Livonia, Mich., dropping the contests by 12-1 and 3-2 final scores, respectively.

The Warriors, winners of 14 of their last 15 games, improved to 27-22 overall and 17-12 in WHAC action after sweeping the Mustangs over the weekend.

GAME ONE â Indiana Tech 14, @MGroveBASEBALL 2
Jon Weatherspoon worked three scoreless innings after giving up a run in the first to the Warriors, one of the NAIA’s hottest offenses over the past three weeks. A freshman, Weatherspoon (Ann Arbor, Mich./Huron High School) retired seven straight batters as part of three straight scoreless innings before the high-powered offense finally broke through again in the fifth.

Before the Warriors were able to break free in the latter innings, freshman Trey Blandford (Louisville, Ky./Fern Creek High School) stole the show with a SportsCenter-worthyÂ diving catch in left field to end the visitor’s threat in the thirdÂ inning.

The Warriors scratched a pair of runs across in the fifth to take a 3-0 lead on Weatherspoon and the Mustangs (2-41, 1-31 WHAC), but the Green and Gold had an answer in the home half of the inning as senior infielder Chris Gittleman took advantage of a wild pitch to make it a 3-1 game after five frames.

The two-run deficit was the closest the Mustangs would get in game one as the Warriors pulled away to win 14-2 after posting a six-run sixth inning.

The Warriors’ Brian Gremaux earned the win after going seven innings, giving up eight hits and two runs while striking out three Mustangs.

GAME TWO â Indiana Tech 3, @MGroveBASEBALL 0
For the second time in as many days, head coach Ryan Kottke watched a Mustang starting pitcher spin a gem â only to end up on the wrong end of the decision due to a tough game by the offense. Starter James Edwards went the distance in the seven-inning contest, giving up three runs â one earned â in the Mustangs narrow 3-0 setback to the Warriors.

The visiting Warriors nabbed the series sweep by staving off the Mustangs in Sunday’s game two, spoiling Edwards’ quality start in the process.

Edwards scattered six hits over the seven-inning performance, yielding one earned run on one walk and six strikeouts Sunday afternoon. Edwards’ counterpart and Warriors’ starter Jason Sterrett was up to the task, going the distance as well to post seven innings of two-hit, eight-strikeout ball to earn the win in the pitchers’ duel.

The Mustangs’ David Chung (Warren, Mich./Bishop Foley High School) and Kyle Hartwick (Oxford, Mich./Rend Lake CC) recorded a hit each in an otherwise difficult game two for the Mustangs offense against Sterrett and the Warriors.