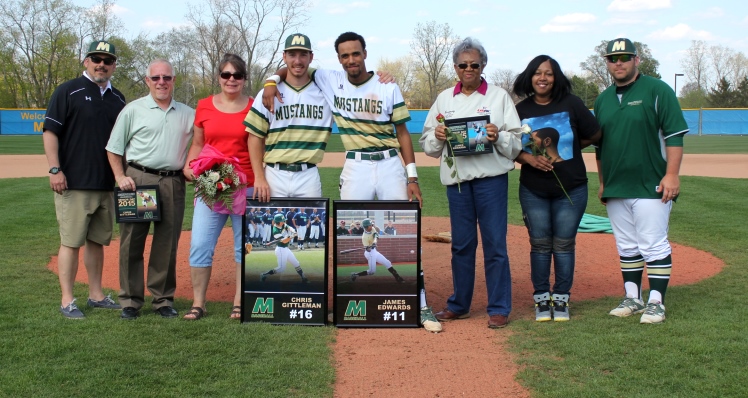 LIVONIA, Mich. — The inaugural season of Marygrove baseball came to a close Saturday (May 2) in dramatic fashion as the Mustangs walked-off Lourdes University for the second time in as many days, winning the nightcap 2-1 in extra innings at Madonna’s Ilitch Ballpark. The walk-off theatrics highlighted an amazing senior day for James Edwards and Chris Gittleman and was capped off by Kyle Hartwick’s two-RBI single in the ninth inning.

With the positive nightcap result, all three of the Mustangs conference wins in 2015 came via the walk-off. Hartwick (Oxford, Mich./Rend Lake CC) was responsible for two of the late-inning basehits while Edwards (Detroit, Mich./Shaw University) recorded the other Friday (May 1) against the Gray Wolves (14-36, 8-25 WHAC).

Edwards picked up the win on his own senior day, going all nine innings for to earn complete game number two on the season.

GAME ONE â Lourdes 11, @MGroveBASEBALL 4
One game after being walked-off in Friday’s final game, the visiting Gray Wolves jumped all over Mustang pitching in game one to win, 11-4. The Mustangs were held without a run until a four-hit sixth inning plated Raleigh Wilson (Harrison Twp., Mich./L’Anse Creuse High School) to cut the Gray Wolves lead to 9-1.

The visitors tacked on two more runs from there to win Saturday’s opener, 11-4, behind starting pitcher Fran Shaffer’s six-plus innings of work.

Chung paced the Mustangs with a 4-for-5, two-RBI performance in game one while Hartwick, Johnson and Wilson followed closely with two hits each.

Jon Weatherspoon (Ann Arbor, Mich./Huron High School) was the pitcher of record for the Mustangs, exiting after four innings.

GAME TWO — @MGroveBASEBALL 2, Lourdes 1 (F/9)
The Mustangs made the most of their final series of 2015, winning in walk-off fashion for the second day in the row thanks to the late-inning heroics of Oxford-product [Kyle] Hartwick. Before Hartwick had a chance to end the season in style, the Mustangs and Gray Wolves engaged in another pitcher’s duel as the nightcap went scoreless into the ninth inning of the scheduled seven-frame contest.

Moments after his senior day, James Edwards took to the mound in search of a win to cap off the campaign. Edwards was rolling into the ninth before an unearned run crossed the plate to break the scoreless tie. The unearned run was all Edwards gave up as part of a dominant outing as the senior carved up the Gray Wolves’ hitters to the tune of five hits and five strikeouts.

Edwards was dynamic against an otherwise unconventional Gray Wolves’ lineup, but his counterpart Matt Olslavsky was up the task en route to pitching a gem and holding the Mustangs scoreless for eight innings of five-hit, seven-punchout baseball.

Down 1-0 in the bottom of the ninth, the Mustangs faced a do-or-die situation in extras and were down to their final two outs when Chung sent a sharp single to right-center field to start a Green and Gold rally. With Chung on and one out, Kottke signaled for Tyler Sykes (Sterling Heights, Mich./Stevenson High School) to enter as a pinch runner at first with Wilson at the dish.

Wilson would come through in the clutch, sending a double off the base of the center field wall to put runners on second and third with one out. With the red-hot Edwards up next, Gray Wolves’ skipper Andy Ham elected for the intentional walk, loading the bases full of Mustangs for Hartwick.

The sophomore catcher came up big, plating Sykes and Wilson on a season-ending, walk-off single through the left side of the infield. The hit was Hartwick’s second walk-off of the 2015 campaign, resulting in a mob scene throughout the infield as the Mustangs celebrated a historic cap to year one in program history.

Chung, one of the key pieces to Kottke’s future plans, recorded a hit when the Mustangs needed him most to cap a 1-for-4 game two after going an impressive 4-for-5 in the first contest. Edwards collected one hit and one walk, while fellow senior [Chris] Gittleman, freshman Troy Justice (Detroit, Mich./Southfield Lathrup High School), Hartwick and Wilson were responsible of the other Mustang hits in the season finale.

After going the distance, Edwards earned win number two and his second complete game of the 2015 campaign.

The Marygrove athletic department extends a special thank you to James Edwards and Chris Gittleman, as well as their respective families and support systems, for the overwhelming commitment to the first-year program.Â