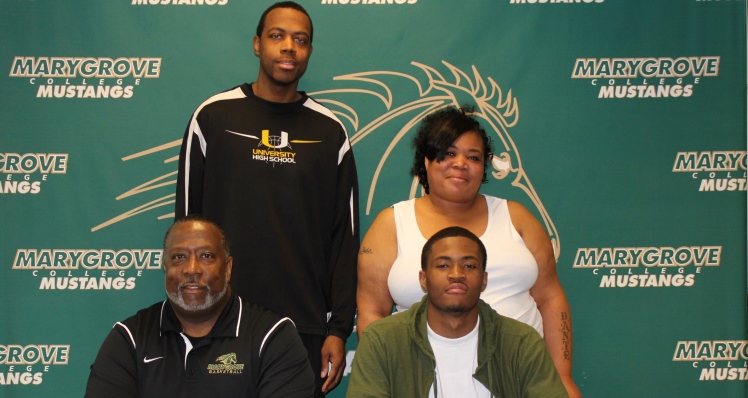 FERNDALE, Mich. — Fresh off of the first signing of the 2015 last week, Marygrove men’s basketball continued to ink commits on Thursday (May 28) when University High’s Charles Watkins, Jr. signed a 2015-16 Letter of Intent to continue his academic and athletic careers at the northwest Detroit institution. The signing is the second in as many years for Marygrove men’s basketball at Ferndale’s University High.

“Charles is an exceptional athlete and a very hard worker,” said Wilson. “He came to practice every day ready to work and was a great example for his teammates. I’m sure he’ll do well transitioning to the next level. We are all very proud of him at University High.”

On the high school hardwood, Watkins Jr. helped University High take home a 2013-14 district championship â an honor shared alongside Martin. The well-rounded student-athlete participated in cross country and track & field and made the honor roll in each of his four years at University High.

COACH COVINGTON’S TAKE
“Charles is an athletic guard that played a lot of the off-guard position in high school,” said Covington. “He has solid ball-handling skills, which will give him the opportunity to compete at either guard position. Charles is a tough-minded young man that fits the mold of WHAC basketball and is a great addition to our program. We look forward to coaching him next season.”