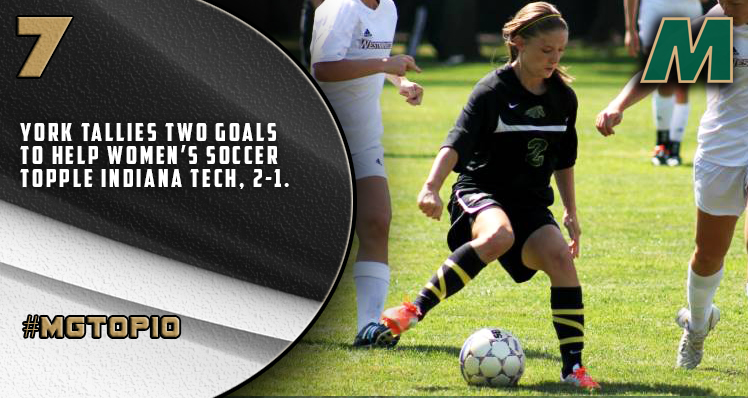 Welcome back to the 2014-15 #MGTop10! The number seven moment in our countdown goesÂ to Cheyenne York and @MGroveWSOCCER for their dramatic 2-1 win over Indiana Tech. Winless in Wolverine-Hoosier Athletic Conference (WHAC) play since 2012, senior striker Cheyenne York came up big the for Mustangs, tallying a pair of goals to help the Green and Gold power past Indiana Tech by a 2-1 final tally.

The senior was aided in each goal-scoring effort by her fellow seniors Kamry Miller and Kaitlyn Vigna, each earning an assist in the historic win. Congratulations to Cheyenne, Kamry, Kaitlyn and the entire Mustangs women’s soccer team for taking home the number seven spot in this year’s #MGTop10 countdown!Â Want to get in on the conversation? Additional conversation and releases can be found on our social media pages throughout the duration of the series. UseÂ #MGTop10Â or tweet toÂ @MGroveAthleticsÂ to interact with us daily.

The win temporarily places the Mustangs (2-9-1, 1-2-1 WHAC) in seventh place among WHAC teams, one spot ahead of Saturday’s Senior Day opponent, the Madonna University Crusaders. If they playoffs started today, both the Mustangs and Crusaders would qualify after posting four and three points, respectively, in WHAC play this season.

As for Wednesday’s game, the visiting Warriors (6-6-0, 0-4-0 WHAC) ran into a physical defense as the Mustangs shut down numerous Indiana Tech advances in the first half. After a back-and-forth start, the Mustangs broke through in the 28thÂ minute after York beat the keeper in a one-on-one situation when Miller sent a well-played ball through the middle the Warrior defense to find her teammate’s feet.

The Mustangs continued to attack, but couldn’t notch another goal before the Warriors’ Jessica Zurcher tied the game with a strike in the 44thÂ minute. Southgate native Tori Singstock provided the assist through the box for Zurcher’s tally as the teams headed into the halftime break tied, 1-1.

The defense did its job, and York did hers as the senior struck again â this time with the game-winning goal â in the 78thÂ minute off of a Vigna assist. The goal was York’s sixth of the season and the 22ndÂ of her career to help the Mustangs land their first WHAC win of the year.

Originally a forward, juniorÂ Bianca BarronÂ (West Jordan, Utah/Barton CC) played another fine game in net for the Mustangs, turning away eight Warrior shots for her first victory of the season. In the first half, Barron came up big with a diving save toward the far post to help preserve the win and inch the Mustangs one step closer to conference postseason play.