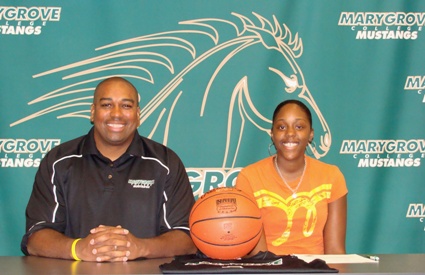 Wilson, a 5’9″ forward with four years varsity experience, is heading home to Michigan after one year in Kansas. Before her out-of-state trip, Wilson played her high school ball locally at Charlotte Forten Academy. She quickly earned a reputation of a hardworking student-athlete at CFA with her dedication to the court and classroom. For her efforts, Wilson was named student-athlete of the year twice (top academic student-athlete), and achieved the peak of high school success when she was named class valedictorian.

Coach Hitchcock on Wilson: Keara is a multidimensional forward with the ability to play inside and outside.  She won a district championship her seniorÂ year and was her teams leading scorer along with being the valedictorian of her senior class of 2008Â with a 3.8 GPA.Â Keara’s work ethic andÂ character will mesh well with the other players of the 2009 recruiting class and we are excited to have the opportunity to coach such a well-rounded student-athlete.