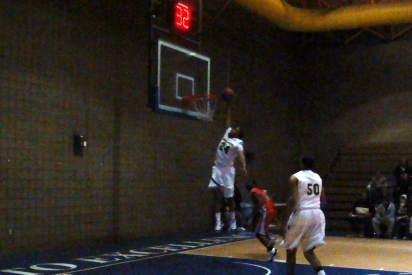 DETROIT, Mich.-The Mustangs put up their second 100-point performance in as many games when they dismissed of Great Lakes Christian, 108-63. A slow start ended in a Mustang stampede that overwhelmed an inexperienced, but tough, Crusader squad.

With NAIA #7 Indiana Wesleyan on deck, the Mustangs may have been guilty of one of sports deadliest habits – overlooking an opponent before a big game. Cold shooting and unforced errors plagued the Mustangs in the first half as the visiting Crusaders applied pressure en rout to an even first half of play.

Fresh off the halftime break, Keontay Glazier (Pontiac, Mich.), Marcus Hopkins (Southfield, Mich.) and the Mustangs went to work and clamped down on the visitors. A 15-2 run over the first four minutes of stanza number two sparked the Mustangs to a solid second half of basketball.

The half was highlighted by dunks from Glazier and a pair of Justin McKinney (Detroit, Mich.) dunks that brought the house down at Ford Fieldhouse in Highland Park. McKinney’s second dunk came via a Mark Brissette (Garden City, Mich.) lob off the high glass for an emphatic slam! From there, the Mustangs cruised to victory, 108-63.

[Keontay] Glazier and John Sheard (Detroit, Mich.) led the Mustangs charge with 18 points each. The duo was followed in double figured by Marcus Hopkins (16), Justin McKinney (11), and Eric Johnson (10). McKinney poured in another well-rounded effort with 16 rebounds, six assists, and four steals to go along with his 11 points. Glazier added 10 rebounds (18 points) for his first double-double as a Mustang. Lone senior Franklin Murdock (West Bloomfield, Mich.) came off the bench for a fine line of eight points, seven rebounds, three steals, and two blocks.

NOTES: The Mustangs back-to-back offensive outbursts averaged 112ppg. Compared to the opponents’ tally of 65.5 ppg over the same stretchÂThe victory lifts the Mustangs record to 7-16.

Despite the recent offensive display, the Mustangs know they will need a strong defensive outing against one of the NAIA’s best teams in the land. “The guys are starting to gel as a unit coming down the stretch. However, we have a long way to go before we get to the level of play we know we are capable of. That level will need to start Saturday when we play [Indiana] Wesleyan. The offense is nice, but if we don’t show up defensively against a strong team like them it could be a long afternoon,” said men’s coach Glen Donahue of their upcoming battle with NAIA power, Indiana Wesleyan. The Wildcats of Indiana Wesleyan, ranked #7 NAIA, play host to the Mustangs, Saturday at 3pm. You can catch the game with streaming TV and live stats available just before tip-off (3pm). Links to the event will be posted on the homepage of www.marygrovemustangs.com.