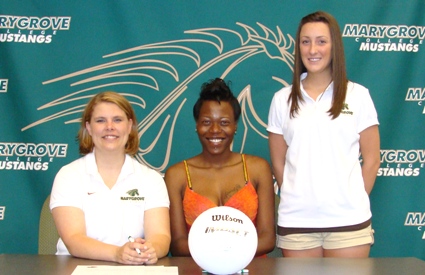 DETROIT, MI–Already, the month of May has brought many verbal commitments to Mustang Volleyball. Today, the Mustangs signed another promising student-athlete for the 2009-2010 season. Deanna Robinson joined the Mustang coaching staff to sign her letter of intent Thursday afternoon at Marygrove College.

Coach Graves on Robinson: We are very pleased to sign Deanna. Above all talent, Deanna’s enthusiasm for the game is her greatest asset. I am looking forward to coaching Deanna because she is a very positive, driven student-athlete.