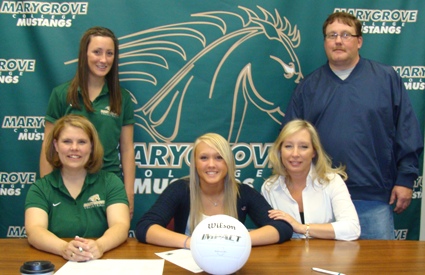 DETROIT, MI–Coach Graves made headlines again with the signing of another local standout. Garden City High’s Shannon Pietruszka became the latest to join Mustang Volleyball on Thursday as she signed a letter of intent at her high school. The multi-sport standout leaves the Garden City Cougars this year with a long list of accomplishments.

Pietruszka, a 5’4″ libero, has enjoyed success on many levels during her high school career. Peitruszka cleaned house with honors such as All-Conference, All-District and All-Region over the course of a highly respected volleyball career. Her team would take the district crown in 2007 and win a Mega Red Conference title in 2008. She helped her team achieve those goals with a 96.4 serve receive percentage, while compiling 1,542 digs her junior and senior year. Exemplifying the true meaning of a student-athlete, Pietruszka was also named Academic All-Region.

Pietruszka excelled on the diamond as well. In 2008, Pietruszka and the Cougars reached the pinnacle of team success as they were crowned MHSAA Division I Softball Champions. During an equally impressive softball career, Pietruszka managed to compile awards ranging from All-District and All-Region (3 years) to All-State. She was also named the Cougars’ Rookie of the Year in 2007.

Coach Graves on Pietruszka: We are very excited to add Shannon to the program. She is an extremely intelligent and competitive student-athlete that has a drive to be the best. We expect Shannon to make an immediate impact in the program from day one. Shannon will be looked upon as a team leader both on and off the court.