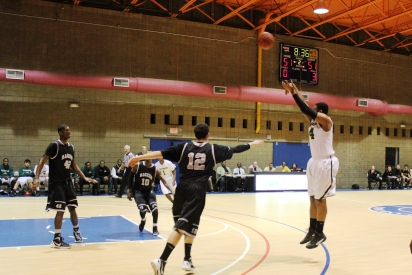 DETROIT, Mich. — The Mustangs earned back-to-back wins to lift their record to 10-15 on the season after topping future WHAC counterpart, University of Northwestern Ohio. The Mustangs used a strong second half to go in front of the Racers (6-18) before a late charge sent the game into overtime.

Late in the game, the Mustangs were able to hit key shots behind junior’s Cameron Coburn (Bay City, Mich./All Saints) and Justin Armstrong (Detroit, Mich./Academy of Oak Park). The pair teamed up to hit timely shots over the last 10 minutes of the contest. Senior guard Chris Sinagoga (Madison Heights, Mich./Bishop Foley) came off the bench for one of his stronger performances of the season with 12 points and four assists to help lead the Mustangs to victory in a 79-73 overtime thriller.

In all, five Mustangs topped double digits in the scoring column with Marcus Hopkins (Southfield, Mich./Southfield) leading the charge by dropping in 17 points. He was followed by Armstrong with 14, Sinagoga (12), Vaughn Bobbitt (Phoenix, Ariz./Oakland CC) with 10 points and 15 rebounds, and Darryll Dixon (Flint, Mich./Hamady) with 11.

The Mustangs next contest will be Wednesday, Feb. 8 at 7:30pm against rival Rochester College at Ford Fieldhouse (Highland Park, Mich.).