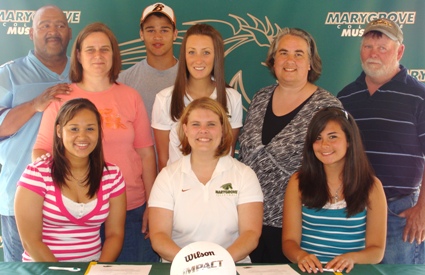 DETROIT, MI –The inaugural class for Mustang Volleyball is nearly formed as Coach Karen Graves added two more pieces to the ever-growing puzzle. Megan Gohl and Shana Tooley signed letters of intent on Wednesday afternoon at Horizon Park in their hometown of Belleville. Both student-athletes will join the Mustangs this fall for the first volleyball season in Marygrove College history.

Gohl, a 5’5″ setter, is another athletic addition to Graves’ gang. A true student-athlete, Gohl was named to the Mega Conference All-Academic Team and graduated with honors. Her play on the court was equally impressive as she was named Honorable Mention All-Region as well. Her eight years of volleyball experience (three AAU) culminated with a district championship this past season. Gohl was also a prominent figure of the Belleville High newspaper/yearbook team for three years.

Tooley, a 5’6″ defensive specialist, came to Marygrove per recommendation of teammate and close friend Gohl. One open tryout was all it would take for Coach Graves to be impressed by the skills of the Belleville star. Like Gohl, Tooley also played three years of AAU volleyball and was part of the 2008 district champion team at Belleville High. Showcasing a wide range of skills, she excelled in other activities such as marching band, softball and tennis.

Coach Graves on Gohl: Megan came to us during our first open tryout and we knew immediately that we wanted her to play for us. She has played both as a libero and setter, which gives us a lot of options when playing her.Â However, because of solid technique and amazing ball control we plan on using Megan as a setter.Â She is a quiet leader, which as a freshman will be very effective.Â As the setter, Megan will have a lot of pressure on her, but we have no doubts that Megan not only will handle this well, but she will excel.Â

Coach Graves on Tooley: Shana also came to us via open try-outs.Â Megan, high school and AAU teammate, convinced Shana to come try out for the team and we are so happy that she did. I have no doubt that I will be able to throw Shana into a position that she may not be comfortable in and she will succeed.Â This type of player is invaluable to a coach and a new young program.Â In addition, her attitude, work ethic, and skills will be the platform she needs to have a successful collegiate career.