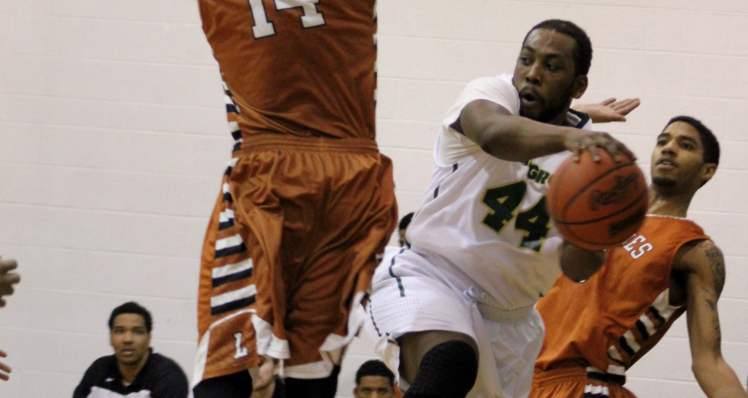 The win, coming inside Detroit’s Northwest Activities Center, marked the Mustangs second WHAC win of the season and moved the Green & Gold to within one game of Lawrence Tech and UM-Dearborn in conference play.

Much like the previous meeting on Jan. 4 in Sylvania, Ohio, the Gray Wolves and Mustangs engaged in a hard-fought contest early on as Lourdes held on to a one-possession edge, 23-21, with 10:29 remaining in the opening half after the Mustangs’ Xavier Walker (Flint, Mich./Mott CC) got into the paint for the lay-in.

From there, the Gray Wolves went on a 6-0 run over the next three minutes to go ahead by eight, 29-21. The Mustangs answered with a quick burst of their own as DeVonte Pryor (Pontiac, Mich./West Texas A&M) and Darryll Dixon (Flint, Mich./Hamady) combined for eight in-a-row to bring the game to one of its 13 ties on the afternoon at 29-29. Pryor connect for three, while Dixon added a three and a fast break layup to knot the game at the 4:58 mark of the first half.

The first half’s final five minutes was a precursor of the back-and-forth battle yet to come in the latter stanza as the Mustangs went into the halftime break up 37-35 after a pair of late Dixon charity stripe tosses.

The Mustangs’ JuJuan Armstrong (Detroit, Mich./UM-Dearborn) got the scoring started in the second half with an easy layup off of a Pryor assist. The four-point (39-35) lead held for a brief period of time before the Gray Wolves tied it again at 39-39.

Strong play on both ends of the floor led the Mustangs to a five-point lead with 5:41 left to play as Pryor came up big with a pair of steals that led to converted free throws by Armstrong and Dixon. The Gray Wolves had one final run in them as Zack Steinmtz led his team back to a 67-67 tie with 1:51 remaining.

Marygrove was able to finish off the Gray Wolves over the final 1:51 behind clutch free throw shooting from Diante Taylor (Battle Creek, Mich./Central), Pryor and Walker as the Mustangs outscored the Ohio-based team 11-3 in that span to win, 78-70.

Taylor connected on one of the game’s biggest buckets late as he used an Armstrong steal to race out to a fast break layup to effectively put away the Gray Wolves late.

The Mustangs forced the Gray Wolves into 21 turnovers and converted the miscues into a 17-8 advantage in points in the paint to nab the valuable conference win. The Mustangs’ bench, led by Pryor, outscored the opposition’s reserves 20-14 despite only playing eight-deep. Hustle on both sides of the court led to Saturday’s thrilling win as the Mustangs ran away from the Gray Wolves in the fast break scoring department, 18-4.

Pryor led the Mustangs with a Maryrove career-high 18 points on the afternoon. The senior leader added seven assists, six steals and five rebounds to complete his best day in a Marygrove uniform. Pryor was followed closely by Dixon with 17 points, four assists and a pair of steals, while Taylor added 14 points of his own to go along with four steals, three assists and three boards in the win.

Walker and Armstrong rounded out the Mustangs’ double-digit scoring leaders with 13 and 12 respectively. Armstrong pulled down a team-high seven rebounds, while Walker dished out a pair of assists.

Lourdes was led by Steinmetz with 24 points and 13 rebounds.

The Mustangs will travel to Adrian Wednesday (Feb. 12) to take on WHAC foe Siena Heights University at 8 p.m.