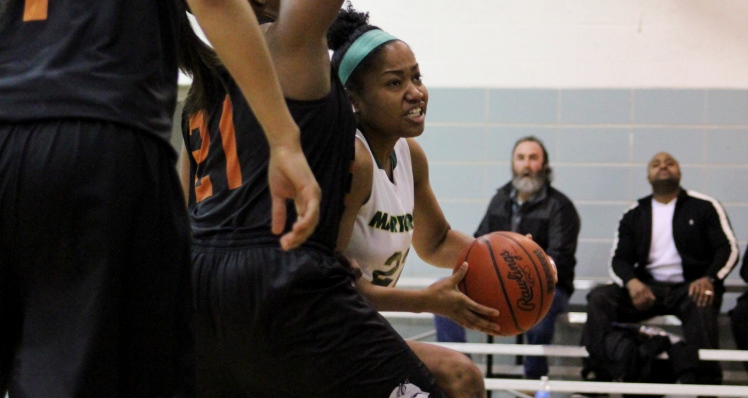 LIMA, Ohio — The seniors of the Marygrove women’s basketball team embarked on the final road trip of their collegiate careers Saturday (Feb. 15) when they visited Lima, Ohio to take on the Racers of the University of Northwestern Ohio (15-13; 12-8 WHAC) for a Wolverine-Hoosier Athletic Conference (WHAC) showdown. The Mustangs (2-25; 0-20 WHAC) â playing the Racers tough for the second time in as many meetings this season â watched the Racers pull ahead behind a 12-0 first half run as the Green & Gold went on to drop the conference contest by an 88-58 final.

A pair of Arielle Edwards (Grand Rapids, Mich./Ottawa Hills) three-pointers got things started offensively and gave the Mustangs a 6-5 lead in the opening minutes of Saturday’s game. UNOH’s Kylie Kahlig dropped in her team’s first 10 points to put the Racers up 10-7 to match Edwards’ hot-shooting start. From there, the Racers went up 15-10 with 14:57 to play despite strong efforts from Edwards and Asia Cooks (Bakersfield, Calif./Stockdale) as the duo combined for the first 10 Mustang points with six and four respectively.

Despite missing key free throws and giving up possessions via unforced turnovers, the Mustangs were able to cut into the Racer lead when Ciara Moore (Detroit, Mich./Northwestern) broke free for a fast break layup. The transition basket brought the Mustangs to within four, 28-24, forcing Racer head coach Kyle Menchhofer to call a timeout at the 6:12 mark of the first half.

After the timeout, the Racers came out with a renewed energy and darted ahead by 16 behind a 12-0 run over the next three minutes. Senior guard Anastasia Smith (Cleveland, Ohio/Bluefield State) slashed into the lane for a running jumper to break a four-plus minute scoring drought as the score reflected a 42-26 UNOH advantage.

The Racers had an answer to Smith’s basket by scoring the final five points of the opening stanza to take a 47-28 lead into the half. The 19-point halftime deficit was largely due to 15-first half turnovers for the Mustangs. UNOH turned the 15 Marygrove miscues into 18 points compared to the Mustangs two points off of Racer turnovers.

Cooks tallied eight first half points for the Mustangs, the most of the season for the freshman out of California.

The Mustangs came out of the halftime break ready to run and cut the Racer lead to 13 at 50-37 a little over three minutes into the latter frame. The deficit would be cut to as little as 12, but the Racers had too much firepower as they dashed past the Mustangs to take the 30-point conference decision.

UNOH was paced by Natalie Billing with a game-high and career-high 22 points.

With the final road trip of 2013-14 in the books, the Mustangs will return to Detroit’s Northwest Activities Center for their final two games of the season Wednesday (Feb. 19) at 5:30 p.m. and Saturday (Feb. 22) at 1 p.m. Saturday’s game marks Senior Day 2014 for the Mustangs’ six seniors: Arielle Edwards, Candice Minus, Ciara Moore, Kaitlyn Pusey, Anastasia Smith and Adrienne Weaver. The Senior Day ceremony will take place five minutes prior to tip-off of the men’s game.