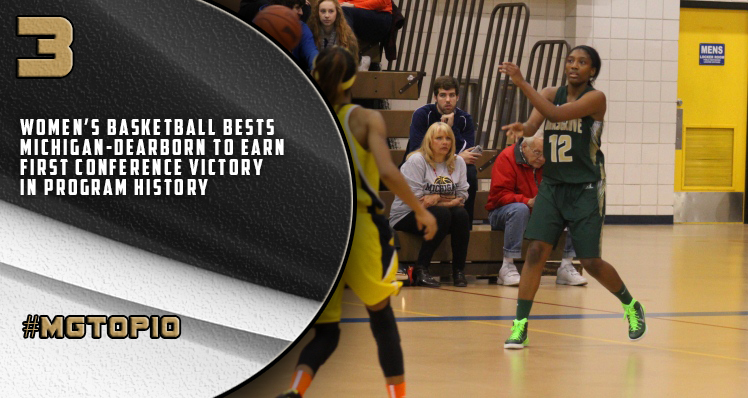 We’ve reached the top three in ourÂ 2014-15Â #MGTop10! Today we will look back atÂ our number three moment to highlight a historic win for @MGroveWBBALL and head coach Craig Covington.Â On Dec. 6, 2014, junior guard Tiffany Bradford (pictured) connected on four first half threes, five in total, to finish with a team-high 17 pointsÂ in the Mustangs’ historic 66-61 victory over the University of Michigan-Dearborn. Bradford’s first-half display gave the Mustangs an early cushion and eventually helped secure the program’s first Wolverine-Hoosier Athletic Conference win in program history.

Six weeks later, the @MGroveWBBALL squad did it again, topping Michigan-Dearborn at home, 73-67, behind a team-high 15 points from Raeha Weaver and a game-high 12 rebounds from Micaiah King.

DEARBORN, Mich. –Â They’ve been waiting for this since 2012. Marygrove women’s basketball picked up its first Wolverine-Hoosier Athletic Conference (WHAC) win in program history Saturday (Dec. 6), besting the host University of Michigan-Dearborn Wolverines by a 66-61 final tally. The long-awaited victory snaps a losing streak that has been active since the Mustangs (2-8, 1-4 WHAC) joined the WHAC in 2012, effectively ending a 49-game skid in conference play.

The Mustangs, led by second-year head coachÂ Craig Covington, opened up the contest on a 16-4 run and never looked back in a game where the three-point shot proved to be the difference for the Green and Gold. Junior guardTiffany BradfordÂ (Detroit, Mich./Dakota College) keyed the early run, knocking down three of her game-high five three pointers to outscore the Wolverines 9-4 over the course of the game’s opening five minutes.

Playing without their leading scorer Jalissa Williams, the Wolverines (2-9, 1-5 WHAC) would answer after going down 16-4, engineering a 20-11 run over the next 10 minutes of action to cut the Mustangs lead to 27-24 with 4:32 remaining in the first half. The Mustangs had an answer of their own in the form of the three pointer as Bradford connected from deep again to lift the Mustangs lead to 30-24 with 3:47 left on the first half clock.

The Mustangs used Bradford’s three to close out the half strong and take a 36-27 lead into the locker room at the halftime break. The nine-point halftime spread was a product of the Mustangs’ ability to hit the three as the Green and Gold connected on six from downtown compared to one for the Wolverines.

Behind a barrage of three pointers, the Mustangs raced out to a 15-point lead, 48-33, with just under 13 minutes left in the conference contest. A determined effort by the Wolverines fell just shy as the Mustangs closed out a close contest down the stretch to hold on the for the historic 66-61 victory over the Wolverines.

Bradford’s five triples led the Mustangs to the win as the team used an11-1 advantage in three point field goals made to hold off a hungry Wolverines squad. Bradford led the Mustangs with 17 points, adding five rebounds and a pair of assists in the historic win.

Senior wingÂ Janeesa JamiersonÂ (Battle Creek, Mich./Kellogg CC) put together a well-rounded game, tallying 10 points, three rebounds and a pair of steals, while freshman guardÂ Shavarra PattonÂ (Detroit, Mich./Southeastern High School) chipped in with 10 points of her own to go along with four assists.

The Wolverines were led by Courtney Teets with a game-high 19 points.

The Mustangs will be on the road for the remainder of 2014 and will continue WHAC play at Lawrence Tech Saturday (Dec. 13) at 1 p.m.