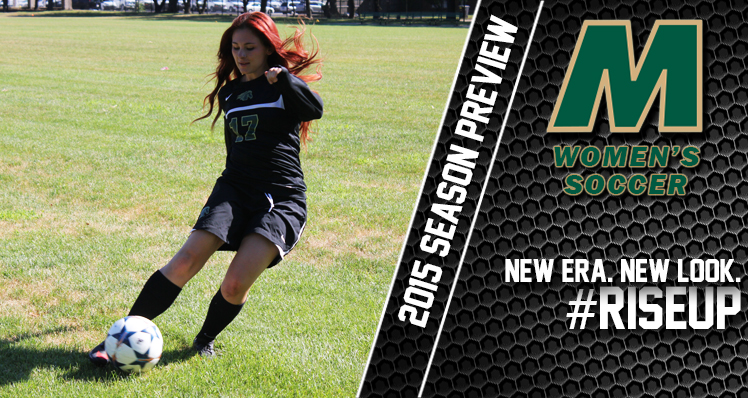 DETROIT — It is no secret the 2015 season will be one of rebuilding and retooling for the Marygrove women’s soccer team. Once a 2009 USCAA National Champion, the Mustangs women’s soccer team has fallen on difficult times over the past couple seasons, going 12-41-2 overall since joining the Wolverine-Hoosier Athletic Conference (WHAC) in 2012.

Sampson, 34, the former long-time assistant coach for the Marygrove men’s soccer team, has recruited key foundational pieces to join the Mustangs roster in 2015 and is already leading a turnaround in the program’s culture and everyday pursuit toward its return to prominence. A former professional indoor soccer player and WHAC standout at Madonna University, Sampson is no stranger to the conference and is eager to continue to recruit and build a champion on the Marygrove campus.

If the upcoming 2015 roster makeup is any indication, Sampson is well on his way to leading a resurgence for Marygrove women’s soccer, adding four local high school talents in a limited offseason after being hired in April.

SCHEDULE BREAKDOWN â HOME COOKIN’
The Mustangs will host eight opponents on their grass pitch in northwest Detroit this season. The eight home games ties for the most home tilts in a season in program history, done on two other occasions, once in 2012 and again in 2014. For the first time in program history, the Mustangs will open up at home with three consecutive home tilts and will kick the Mustang Sports Network broadcast season off at 2:45 p.m. on Aug. 22 when NAIA counterpart Purdue University-Calumet (Ind.) visits the Motor City.

Home games against Bluffton (Ohio) and Cleary (Mich.) follow the 2015 opener on Sept. 5 and 6 over Labor Day Weekend. Both games will be streamed video on the Mustang Sports Network at marygrovemustangs.com/live.

The first road contest under the direction of Sampson will take place on Sept. 11 when the Mustangs take on the Trolls of Trinity Christian College (Ill.).

THE REBUILD â RIGHT PIECES IN PLACE
The overhaul starts and ends this season with a group of fantastic freshmen from across the southeast Michigan region. Raven Buck, Allison McDowell and Cayleigh Scott all signed on to play for the Mustangs under its new head coach, marking the beginning of a new era in Mustang soccer under Sampson’s guidance.

Scott (Westland, Mich./Arbor Prep) is the first Arbor Prep soccer player to play at the collegiate level and was the first to commit to the Mustangs’ 2015 class. The athletic defender will be an anchor in back over the next four years alongside longtime friend and teammate [Raven] Buck (Westland, Mich./John Glenn High School).

McDowell, another top target of the 2015 class for Sampson, steps on the collegiate pitch with a wealth of experience from her playing days at Novi High School, Waza FC and the Michigan Jaguars. McDowell is slated to play as an attacking mid or striker up top for Sampson and the Mustangs this season.

Hamtramck’s Brandi Schonter also joins the 2015 incoming class and will be slotted as a midfielder or forward.

SENIOR LEADERS
Seniors Sara Ruch (Oxford, Mich./Oxford High School) and Brandy Lynch (Livonia, Mich./Crestwood High School) each return for their fourth and final season donning a Marygrove Green and Gold kit, playing for their fourth head coach in the process â something newcomers will not have to endure with Sampson committed to the program for the long haul. The seniors have been through a lot at Marygrove, seeing the high-octane days of women’s soccer for the Mustangs and the ups-and-downs of the past couple seasons.

Both Lynch and Ruch will be counted on as leaders with plenty of youth surrounding them. The pair will be joined by fellow returners Bianca Barron, Olimpia Bonilla, Karina Cebrero, Farwa Haider, Kiami Monsivais and Johari Ndaizeye on the 2015 roster.

FROM THE HARDWOOD BACK TO THE PITCH
Janeesa Jamierson (Battle Creek, Mich./Kellogg CC) â a former two-year standout on the hardwood for the Marygrove women’s basketball squad â is going back to her roots on the pitch this season. Jamierson is set to join the Mustangs women’s soccer team and is the projected starting keeper this season â a position Jamierson is quite familiar with after playing four years between the pipes during her high school days.