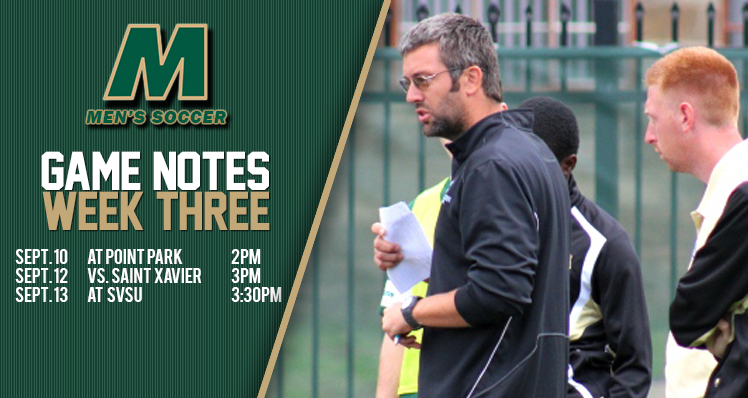 BY THE NUMBERS
3:Â The Mustangs enter arguably their toughest week of the season as three (3) games lie ahead Sept. 10-13. In all, the Green and Gold will play three matches in four days beginning Thursday (Sept. 10) in Pittsburgh, Pa. against Point Park. The team returns home to face Saint Xavier (Ill.) on Saturday before visiting NCAA DII No. 18 SVSU Sunday afternoon.Â

3:Â The Mustangs have tallied three (3) goals through three games this season â the lowest output to begin a season since 2012 when the Green and Gold tallied only one goal through the opening three matches. Despite tallying three goals, the Mustangs have looked impressive, taking NAIA No. 9 Lindsey Wilson (ky.) to overtime in 2-1 loss and topping Bethel (Ind.), 2-0.

10:Â Junior keeper Austin Valentine has been one of many bright spots for the Mustangs in the early portion of the 2015 slate. After sitting out last season due to the WHAC transfer rule, Valentine has been brilliant in net in 2015 to the tune of a 0.97 goals against average. In total, Valentine has earned one clean sheet in 185 minutes, turning away 10 shots through two games.

MUSTANG REWIND
After a lengthy time away from the pitch, the men’s soccer team fell on the road at Huntington (Ind.) by a 3-0 final tally. The 3-0 score was unlucky as the Mustangs outshot the host Foresters 17-10 overall and 8-4 on target in the non-conference match between NAIA schools. The Mustangs were sharp at times, but a 13-day layoff between games caused a bit of rust to show in the three-goal defeat in Indiana.

PREPARING FOR WHAC PLAY
The non-conference slate continues this week with a trio of games, one at home, as the Mustangs continue to prep for Wolverine-Hoosier Athletic Conference (WHAC) play. Last year, the Mustangs finished fourth in the WHAC and hosted the program’s first conference playoff match in the process. WHAC play begins Sept. 26 in Southfield, Mich. against Lawrence Tech.

DELVING INTO JALLOW’S CAREER
Abdoulie Jallow (Bansang, The Gambia/Rust College) has been one of the more successful players to ever don a Marygrove Green and Gold soccer jersey. A senior, Jallow is looking to close out his collegiate career on a winning note as he and the Mustangs are primed for a breakout campaign. Through three-plus seasons, Jallow has amassed 21 goals and 23 assists to tally 65 career points. Jallow is already the all-time leader in career assists with 23 â doubling up the player with the second-most assists in program history (11).

STILL NOT AT FULL STRENGTH
With a potential starter or two still out of the mix, head coach Matt Johnson and the Mustangs have yet to run out their top lineup in 2015. Through three games, the Mustangs have used three different lineups with 16 total players earning a starting nod. Only six players have remained as starters all season.

DID YOU KNOW?
Abdoulie Jallow (Bansang, The Gambia/Rust College) is third in all-time game-winning goals with eight over the course of his three-plus year career.Â

A LOOK AT POINT PARK
Point Park University â the baseball home of former Detroit Tiger Don Kelly â is off to a solid 2-2-0 start in 2015. The Pioneers have knocked in nine goals through four games, led by Max Flick and Donovan Morgan with two goals each. Keeper Zak Borzovoy has been in net for every minute of action this season for the Pioneers, boasting a 1.47 goals against average and a .700 save percentage through four starts.

A LOOK AT SAINT XAVIER
The Saint Xavier Cougars will head to Detroit on Saturday (Sept. 12) looking to avenge a 3-1 defeat at the hands of the Mustangs in Chicago last season. The Cougars own a 1-2-0 record entering the week and are led by Ricardo Aldape and Roger Ciszweski with one goal each. The pair have combined for four of the Cougars’ five points through three games this season.

A LOOK AT SAGINAW VALLEY STATE
Get ready for the fifth matchup in as many years between the Mustangs and the Saginaw Valley State University Cardinals. The Mustangs and Cardinals have engaged in classic battles, but the NCAA Division II opponent has remained 4-0 all-time against the Green and Gold. Last year, the Mustangs Â were edged by the Cardinals, 1-0 â the second one-goal game between the teams in four all-time meetings. Jordan Kalk leads the Cardinals with three goals in two goals, while Tyler Channell paces the team in assists (5).

THIS WEEK IN MUSTANG HISTORY
The men’s soccer team toppled fellow NAIA schools Grace (Ind.) by a 3-2 margin back on Sept. 7, 2013 behind two goals from former Mustang standout and current Lebanese professional player Jad El-Zein and a goal from current Mustang, Moussa Diallo. El-Zein tucked in the game-winner in the 85th minute.

THE MUSTANG SPORTS NETWORK (MSN)
The MSN is back for another year of live video on marygrovemustangs.com/live, this time with expanded coverage including multiple cameras and added talent!